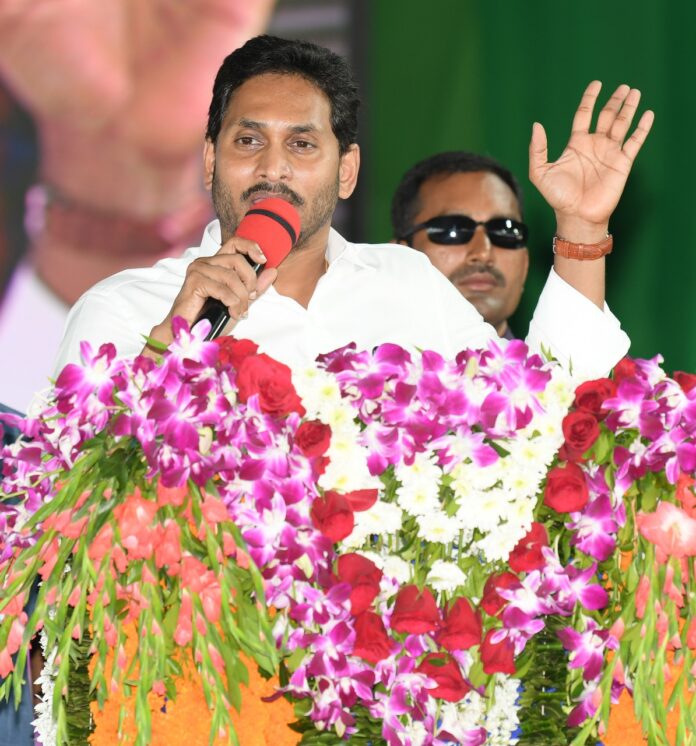 Strongly objected the language they used
Avanigadda, Oct 20: In a scathing attack on the Opposition parties, Chief Minister YS Jagan Mohan Reddy took strong objection to their abusive language as they have no achievements to tell while the Government on the other hand is pursuing with its welfare agenda.
Addressing a huge public meeting here on Thursday, he said, while the State is going ahead with three capitals formula keeping in mind decentralisation and development of all areas equally, self-proclaimed leaders are advocating three marriages and shamelessly resorting to abusive language and showing slippers publicly on TV channels. The Chief Minister wondered whether such leaders can be of any help to the people.

What would happen to the self-respect of our women if these leaders are to be followed, he asked. Such leaders, who have nothing great to claim about themselves cannot guide people and the society. It is very clear that Chandrababu has instigated the adopted son, he said.
Back stabbers and leaders who change colours like chameleons at election time and their friendly media have ganged up against the Government by forming unholy alliances to take on him, lone Jagan.

Observing that the coming 19 months will witness a continuous war between the pro-people Government and the yellow gangsters who have formed opportunistic alliances, the Chief Minister expressed confidence that people will fully stand by him to thwart their attempts.
It is going to be the war between the poor and the capitalists, between the good and the evil and between advocates of social justice and the people dividing the society, said the Chief Minister.

Asking the people to keep away from slanderous propaganda, he said they should introspect whether they are benefitted or not by the welfare schemes of the Government.
Asserting that he is not depending on media, dirty policies or adopted sons, he said that he is only depending on each and everyone in the state who benefited from the welfare policies of the Government.