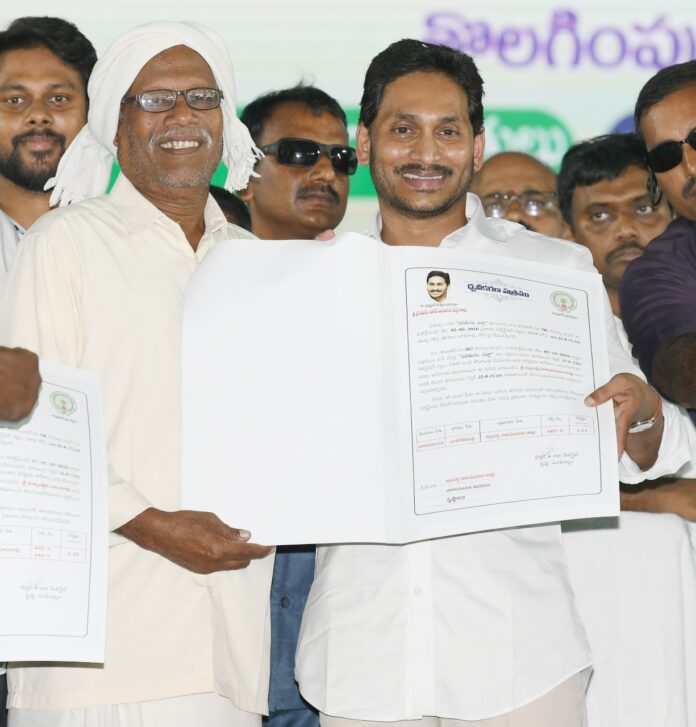 22,042 farmers will be benefited
Avanigadda, Oct 20: Launching the program of denotification of 35,669 acres of land across the state here on Thursday, Chief Minister Y.S. Jagan Mohan Reddy said it will restore the farmers’ rights to sell or gift them. The denotification will benefit 22,042 farmers in phases.

Observing that the denotification of lands from Section 22A will fully restore the rights of farmers who were barred from selling or gifting them due to the wrong policies of TDP regime, he said the program is only part of the resurvey of lands taken up after 100 years to permanently solve the land disputes across the state.

He said 10, 019 farmers in Avanigadda constituency alone will get their rights back over 15791 acres while the rest of the farmers across the state will get freedom from Section 22A in phases.

The anti-farmer TDP Government brought several GOs in May 2016 taking away the rights of farmers by including certain categories of lands like ‘chukkala bhumulu’, ‘anadita bhumulu’ and assigned lands in Section 22A barring the farmers from selling or gifting them to others.

Even after 75 years of independence, farmers and land owners are facing multiple problems due to lack of error-free land records. But the present Government is transforming the state into a role model by implementing several pro-farmer policies, he said.