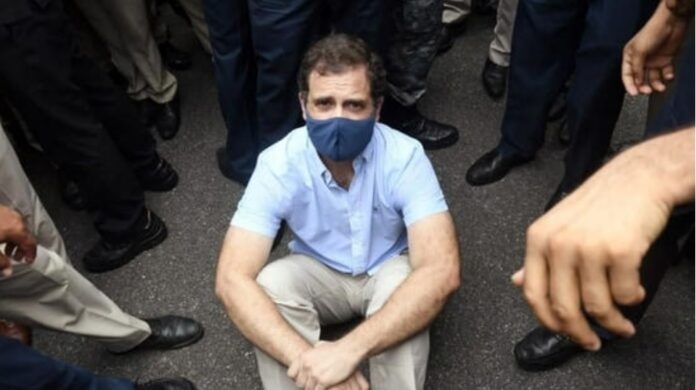 (Anita Saluja, New Delhi)
Scion of the Gandhi family Rahul Gandhi, who has been reluctant to take-up the responsibility of Congress President for almost three years, is left with no option now. Keeping in mind the health of his ailing mother and more importantly due to the Congress getting decimated fast all-over the country, Rahul will be forced to occupy the top post of the party. Though his coronation will be no surprise to anyone, what will be of interest is to see if he is able to save the party.
Unlike the Shiv Sena, where the rebel leader Eknath Shinde was able to split the party, walking out with a major chunk of party MLAs, in the Congress, no one has the courage to desert the Dynasty, even if the party is on a losing spree. The fate of the likes of G-23 leaders like Kapil Sibal, Ghulam Nabi Azad, Anand Sharma and Manish Tewari is known to everyone, as not many came forward to speak up against the Leadership.

Interestingly, though everyone would vouch for the fact that Uddhav Thackeray appears to be more stern and strong than Rahul Gandhi, but the latter undoubtedly is leading a national party, where it is difficult to bring about a coup. Moreover, while Eknath Shinde had the backing of the BJP, to satisfy the greed of the MLAs in Maharashtra, the Congress is too large a party, where all the disgruntled leaders cannot be satisfied. Instead of a full-blown revolt against the leadership, one, therefore, witnesses a handful of leaders deserting the party in the States for greener pastures.

Fault does not lie solely with the Congress Leadership, which has been dilly-dallying to assume power, but the entire party, which can’t think beyond the Gandhi family. Sonia Gandhi refused to succeed as Congress President in the wake of the tragic assassination of her husband Rajiv Gandhi, but the Congressmen were adamant and patiently waited for seven years, till she finally agreed to assume charge. Later, despite the insistence of the UPA leaders, she refused to become Prime Minister and instead named Manmohan Singh for the post. Rahul Gandhi, similarly, has been disinclined, but the Congressmen are not letting him to do so.
After the Udaipur brainstorming session in May, wisdom has finally dawned on the Congressmen and the leadership that the situation is really grim for the party. If no urgent steps are taken, the party will cease to exist (Congress Mukt-Bharat), as declared by Prime Minister Narendra Modi. For the first time, perhaps, the message was loud & clear for the Congressmen that the future of all of them is doomed, if the party is not saved.
The fact that the message had indeed seeped in was evident, as within a few days following the Udaipur Nav Sankalp Chintan-Shivir, when the leaders, right from the Chief Ministers, MLAs, MPs and the workers from all-over the country, joined hands in courting arrests in the Capital on the issue of Rahul Gandhi’s quizzing by the Enforcement Directorate. Everyone was amazed to see the Josh of the Congressmen, who thronged at the AICC headquarters and ED office, despite being lathi-charged by the police.
Seniors like P Chidambaram and K C Venugopal were man-handled by the Delhi Police, but the leaders and hundreds of Congressmen, who had come from all-over the States, were unfazed by the Police high-handedness. They vied with one another to show their loyalty towards the Gandhi family. The same scenario was repeated, when Sonia Gandhi appeared before the Enforcement Directorate.

With Rahul Gandhi finally expected to don the mantle of Congress President in the party elections to be held in September, the 137-year-old party, which is gradually fading out, will presumably recharged once again. Soon after his coronation, the party would hold the Bharat Jodo Yatra, from Kanyakumari to Kashmir, with the sole agenda of highlighting the failures of the NDA Government under Modi.
The padyatra, to be inaugurated by Rahul Gandhi, is expected to infuse the much-required adrenaline into the Congressmen, who have been directionless & lethargic in the past few years. In contrast to the Rath Yatra undertaken by L K Advani on the issue of construction of the Ram Temple, which saw the revival of the BJP and rise in the party tally from 85 seats to 120 seats in the Lok Sabha, this time round, the Congress is expecting to create similar magic.
With Rahul Gandhi in the saddle, accompanied by senior leaders, travelling all-over the country, it will not only be an image-makeover for him, but also perhaps the beginning of the party’s graph upwards. Ever since Narendra Modi has assumed power, the Congress has always been at the receiving-end, with its political graph declining sharply in all the States. Both the party and its leadership were ridiculed for inaction and policy paralysis.
As it dawned on the party leadership and the workers at the brainstorming session in Udaipur, the Congressmen can no longer afford to remain inside their barracks. They will have to work really hard to come back to power. The Congress is the sole national party, which can lead the entire Opposition to launch a tirade against the Modi Government. But to lead the regional parties, it is imperative for the Congress to win the elections in the ensuing Assembly elections in Himachal Pradesh and Gujarat this year and subsequently in Karnataka, Rajasthan, Chhattisgarh and Telangana next year.
Only then, it will be in a position to dictate its terms to the other Opposition parties, which have lined up to fill the vacuum created by the Congress decline. The more time Rahul will take to set his house in order, the more he will lose, vis-à-vis other parties, vying to compete with the Congress. Both in Himachal Pradesh and Gujarat, the Aam Aadmi Party has widened its base to give tough competition to the Congress and the BJP. In Maharashtra, similarly, NCP is strong, while in the North-East, besides West Bengal, the
Trinamool Congress is fast replacing Congress.
It’s the last chance for Rahul Gandhi to take up the mantle of the Congress party if he really is keen to save the Congress. No more can he afford to take holidays with his ailing mother on his side and the party losing out badly, every single day.
(The writer is Delhi-based senior journalist and political commentator. Views are personal)