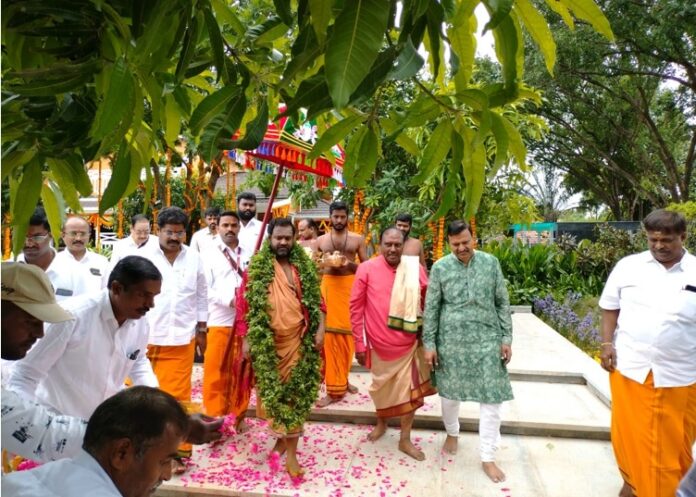 (Dr. Shankar Chatterjee, Hyderabad)
Pragati Resorts in Hyderabad, a wonderful bio-diversity park was established in 1994 and at that time the area was totally barren with terrible climate conditions such that even lizards would not lay eggs there before the establishment of Pragati Resorts. The water in the area was at a low level due to the mining of limestone which made the land unfit for cultivation. Dr G.B.K Rao selected the land on the basis of three criteria – i) it was away from the city also away from the highway, ii) the area was totally non-cultivable /barren, and iii) very low level of water Now, the area has been turned into heaven and the people call “Pragati is Heaven on Earth”. I visited a couple of times and undoubtedly it is ‘Heaven’. Around 800 varieties of sacred herbal heritage medicinal plants, other rare mother plants, and trees inter alia Kalpavriksha also known as Kalpataru, have been planted in Pragati which is spread over an area of 2500 acres. There are healing herbs also which remove toxins and provide refresh to an individual through aromatherapy. Also, the area is completely free from mosquitoes, bad bacteria, and viruses. I observed the people of all religions visit and even stay at night in the area as there are provisions for night staying.
On 24 July 2022, Dr Rao organised a spiritual event at the Resorts for which Sri Sakthi Narayani Amma, affectionately known as Amma, an esteemed spiritual leader from Tamil Nadu was invited.

Although he was known as Amma, he is basically a male saint. In 1992, at the age of 16, Sri Sakthi Amma left the family home and in 1995, Amma founded the Sri Narayani Peedam, a spiritual centre in a remote village named Thirumalaikodi, located near Vellore in Tamil Nadu, India. It is pertinent to mention that “Amma, meaning Mother, is a universal embodiment of the Divine feminine, extending compassion, love and grace. It is believed that Divinity manifests in human form when the balance between good and evil in the world is disturbed. Such a form is known as an avatar, a Sanskrit word describing a deliberate descent or incarnation of the Divine to earth. The avatar descends in order for humankind to ascend on the spiritual path. The avatar lives amongst the people, guiding humankind, reducing suffering and restoring dharma (righteous living) in the world” (belovednarayani.org/about).
From childhood, Sri Sakthi Amma was a very spiritual mined baby. Amma was born on 3 January 1976, to Shri Nanda Gopal and Smt. Jyothiamma. “It was evident from birth that this baby had divine power and very special. A distinct, divine ray of light (Namam) on the baby’s forehead was vividly visible, along with symbols of Chakra (Wheel) and Shankh (Conch) on either side of the chest. Through this, the divine connection was established and people recognized the child as very special. From a very early age, the child exhibited great interest in spiritual life. The child demonstrated profound interest only in spiritual life, participated blissfully in Poojas/Bhajans (religious ceremonies) and insisted on visiting places of worship on a daily basis” (sripuram.org/pages/birth-and-childhood).
There are many charitable activities carried out by Amma’s organisation inter alia of which include free healthcare at the Sri Narayani Hospital and Research Centre which was set up in 2004. Further, children are educated at the Sri Narayani school, and thousands are fed daily at free of cost. In addition, many economic development projects which include income generation projects for the below poverty line (BPL) families have been carried out by the organisation. So the Amma’s organisation, in addition to spiritual activities has been doing social and economic activities for the poor echelons of the society which is really praiseworthy.
(Author is a former Professor& Head (CPME) NIRD &PR, Hyderabad)