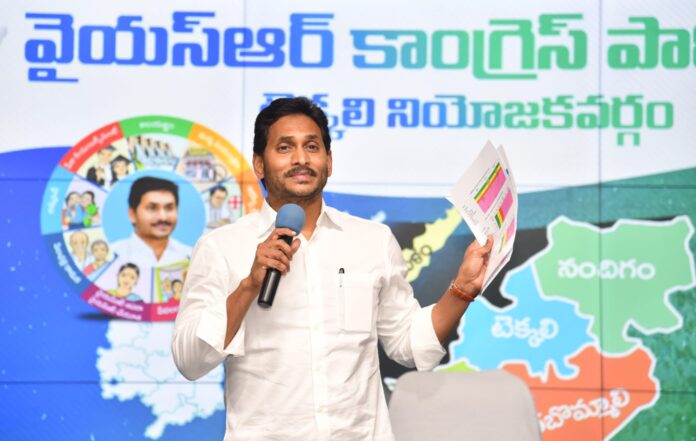 AP CM interacts with Party Tekkali cadre
Amaravati, Oct 26: Chief Minister Y.S. Jagan Mohan Reddy exhorted Party cadre to work towards making a clean sweep of all the 175 assembly seats in the coming general elections.
Interacting with Party cadre from Tekkali constituency here on Wednesday, the Chief Minister said that there should be preparedness from now onwards for the elections due in 18 months.

There is no reason as to why we should not win all 175 seats when fruits of the Government welfare schemes have been reaching people in every nook and corner of the state like never before.

Though elections are taking place after 18 months, a clean sweep of all 175 seats would only be possible if every step of party cadre and leaders henceforth is in the right direction while not giving scope for lackadaisical approach.

The Chief Minister said that Rs. 1026 crore was spent in Tekkali constituency alone in the last 3.4 years through various welfare measures for the benefit of all eligible people with transparency.

He directed them to seek the blessings of people in Gadapa Gadapaku (Governance at doorstep) programme by explaining the welfare schemes such as Rythu Bharosa Kendras (RBKs), village clinics, volunteer services for every 50 houses and a Secretariat for every 2000 people and English medium schools.
Observing that the pilot project of Family Doctor concept has already started functioning, the Chief Minister said it will begin full fledged work from the Ugadi. The Bhavanpadu port would also be coming up in the constituency.

When we have won 119 of 136 panchayats, 74 of the 78 MPTCs, swept all four MPPs and ZPTCs, not just Tekkali but we can also win Kuppam hands down.
Work for the clean sweep, be united and keep the big picture of 30 years ahead in mind, he said.