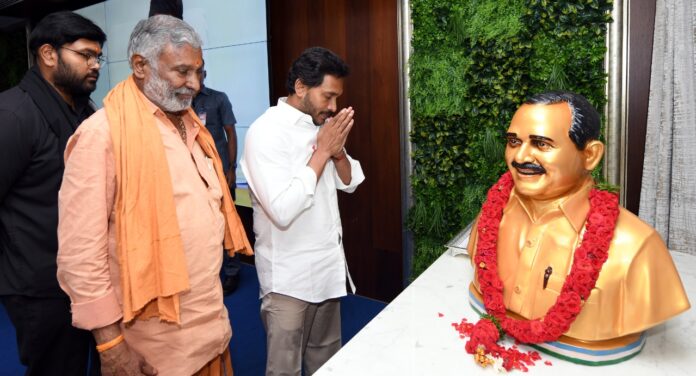 During the meeting, the Chief Minister said that Kuppam was as important to him and is like his own constituency Pulivendula in Kadapa, and assured to develop it in the coming days, besides supporting it in every possible way. He stated that YSRCP Government has developed Kuppam much more in the last three years, far better than what Chandrababu Naidu had done in several decades, and sanctioned Rs 65 crore for various developmental works to Kuppam municipality.

Speaking on the occasion, he said that a majority of people think that Kuppam is a stronghold of TDP, which always supported Chandrababu, but the constituency has more number of BC’s and YSRCP can win Kuppam by taking welfare schemes to BCs. He said that YSRCP had fielded IAS officer Chandramouli in the previous polls, and after his demise, his son Bharat was chosen to contest in coming polls.

Bharat has been doing excellent work for the party in the constituency and played a major role in the party’s victory in the local body and municipal elections, he said, and asked the cadre to support him. He promised to take him in his cabinet on wimning Kuppam.
He asked the cadre to focus on winning the Kuppam seat and break the illusion that Naidu created among the people in such a way that they don’t entertain TDP or Chandrababu Naidu anymore.

He said that the current government had already prioritized Kuppam and did more development than in Naidu’s rule. Schemes like Nadu-Nedu, Village clinics, RBKs, village/ward secretariats have taken governance to the village level in a transparent manner.

The Chief Minister assured to stand by the party in Kuppam by all means to pave way for victory, just like the victories in Panchayat, ZPTC, MPTC, and Municipal polls. He asked the cadre to aim for winning 175 out of 175 seats, starting from Kuppam and work with zeal.