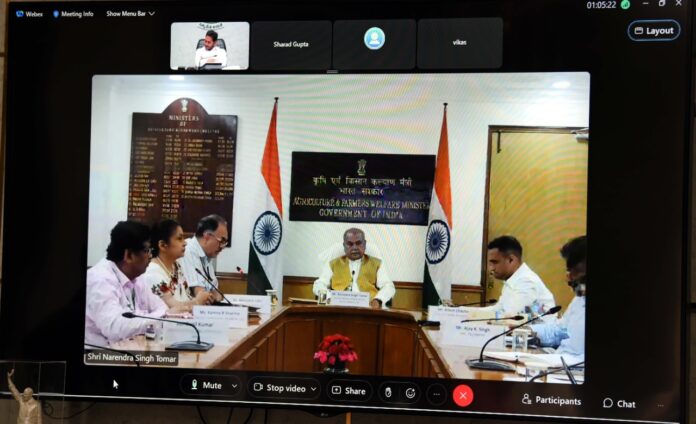 So that it will benefit all farmers
CM video conference with Union Minister Narendra Singh Tomar
Amaravati, July 12: Chief Minister YS Jagan Mohan Reddy on Tuesday participated in a video conference with Union Agriculture Minister Narendra Singh Tomar over bringing ‘Pradhan Mantri Fasal Bima Yojana’ into YSR Free Crop Insurance Scheme.
During the conference, the Chief Minister suggested changes be carried out for Fasal Bima Yojana to benefit all farmers. He explained that all the agricultural activities in the State were brought under 10,444 Rythu Bharosa Kendras (RBKs), where every crop grown by farmers is being e-cropped with geo-tagging and gets updated on a real-time basis. He said that the State government cleared all the hurdles of bringing every crop under insurance coverage through e-cropping, as the government is paying both the premiums that are to be paid by farmers and the State.

He said that a free crop insurance scheme will go a long way with e-cropping and if Central and State Governments bear an equal share of the premium paid by the small and marginal farmers. He requested the Union Minister to consider the proposal and thanked him for including Andhra Pradesh in Fasal Bima Yojana and making changes to the guidelines.
On this occasion, Minister Narendra Singh Tomar hailed the Chief Minister for protecting the interests of the farmers, by bringing revolutionary reforms in the agriculture sector and thanked him for reparticipating in Pradhan Mantri Fasal Bima Yojana. He said that necessary changes have been made in the Crop Insurance Scheme as per the suggestions of various state governments and will be jointly implemented by the state government and the central government, to stand as a protection shield for the farmers.

Acknowledging the innovative programmes of the State government, like e-cropping, the Minister stated that a meeting will be held with Agriculture Ministers to discuss the innovative schemes that would motivate other States. He said that Andhra Pradesh is also very inspiring in Natural Farming and Agri Infra Fund, which benefits farmers.
Agriculture Minister Kakani Govardhan Reddy, Chief Secretary Sameer Sharma, Special CS Poonam Malakondaiah, and other officials have participated in the program.