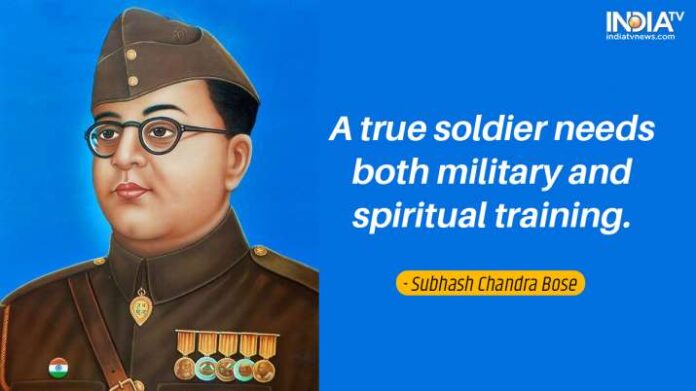 On 23 January 1897, a great personality, a great patriot, a great leader, a great mentor, a brave Parakrami, and still a famous personality in India, Bangladesh, and Pakistan was born in present Cuttack, Odisha who by one word is popular that is, Netaji, Netaji Subhas Chandra Bose.   So, I salute him on his birthday on 23 January 2023.

From childhood, Subhas Chandra was a great patriot and with heart and soul was Indian, and loved India that time India means present India, Bangladesh and Pakistan were all part of India and that is why it is called Undivided/United India. Anyway, Netaji never tolerated any foreigner talking against Indians. In this context, an incident may be cited. He thrashed a British Professor E.F. Otten in the Presidency College of Calcutta in 1916 for Prof Otten’s racist remark against Indians and for this, Netaji had to suffer also, however with the intervention of Indian stalwarts, the matter was settled. He was a popular leader when the Civil Disobedience movement was started in 1930, Netaji was already in detention for his associations with an underground revolutionary group, the Bengal Volunteers. Even then, he was elected Mayor of Calcutta now Kolkata while in prison. He was a brilliant person. His brilliancy may be understood when he went to England in 1919 to appear Indian Civil Service as desired by his parents and in 1920, he came out fourth in order of merit with the highest mark in English but he was deeply disturbed by the Jallianwala Bagh massacre and left his Civil Service probation in midway and returned India. After returning, Subhas Chandra joined Indian National Congress and started working under Deshbandhu Chittaranjan Das, whom he always admired as a political Guru.

While Subhas Chandra Bose was the President of Indian National Congress (two times 1938 and 1939) many admired him for his dynamic role and that is why he was elected President of the Indian National Congress for two consecutive terms but had to resign in the mid of the second term due to ideological differences with Gandhiji as Mahatma Gandhi’s preferred Pattabhi Sitaramaiah, but he was defeated.   It is believed that albeit Pattabhi Sitaramaiah was a Telugu person hailing from the southern part of India but many people of the southern region of India voted in favour of Netaji Subhas. Anyhow, while Netaji was Congress President, he carried out many remarkable works – one was Assam issue. In 1938, Assam was passing through great political turmoil as there was a serious political problem – Muslim League versus Congress. During that time, Gopinath Bordoloi invited Netaji (President of Congress at that time) to visit Assam and intervene. Netaji Subhas Chandra immediately rushed to Assam and strongly advocated the formation of the ministry under the leadership of Gopinath Bordoloi.  As a sequel, Assamese youths were happy and a booklet on Subhas Chandra Bose was published by some enthusiastic students of Cotton College in 1939, under the umbrella of the All Assam Progressive Youth Association (AAPYA, formed at that time).   While Netaji Subhas Chandra Bose was Head of the Indian National Army (INA) or Azad Hind Fauj, Dr. (Mrs.) Lakshmi Swaminathan met him in Singapore and decided to join the freedom movement as she was impressed with the charismatic speech of Netaji Subhas.

She as   Captain Lakshmi headed a regiment called Jhansi Rani Laxmi Bai Regiment, the first regiment headed by a lady in Asia with around 1000 women personnel. Also, it is pertinent to mention that around 60,000 persons consisting of all religions were in Azad Hind Fauj and brigades were in the name of great personalities: Gandhi brigade, Nehru brigade, Azad brigade, Subhas brigade, Rani of Jhansi regiment. Netaji Subhas desired all people in INA/ Azad Hind Fauj should greet each other by using the words “Jai Hind” instead of using religious words.

No Indian can forget Netaji’s great statement, ‘You give me your blood and I will give you Independence!’ While I was abroad (visited some countries), many Bangladeshis and Pakistanis told me they were great admirers of Netaji Subhas Chandra Bose.