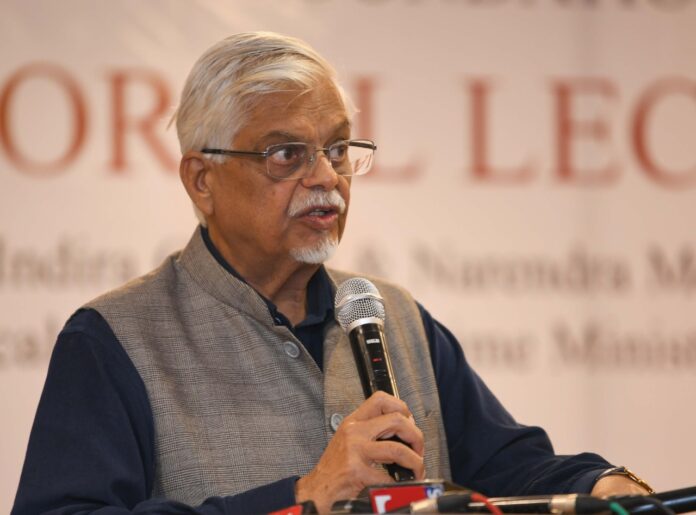 His tenure was a golden era to the nation
PV found the areas of development
No PM till now shown this much of courage
Sanjay Baru praises the former PM in his memorial lecture
Hyderabad, January 07: Today is a day on which everyone who participated in a program held at Hyderabad showered their memories with the late former prime minister Sri PV Narasimharao. The PV Global Foundation organised the PV Narasimharao memorial lecture. PV’s son Prabhakararao, Senior Journalist K.R. Murty, Retd CBI JD V.V. Laxminarayana and MAA Sarma spoke in this program. Former media advisor to the former prime minister Manmohan singh and senior journalist Sanjay Baru delivered the key lecture in memory of PV Narasimharao. He praised PV as the remarkable personality, who guided Indian Economy to flourish in his tenure. Between Indira Gandhi and Narendra Modi: The Transformative Political Economy of Prime Minister Narasimha Rao
Here is the full text of Baru’s speech.

I am grateful to Shri Prabhakar Rao garu and the PV Global Foundation for inviting me to deliver the P.V. Narasimha Rao Memorial Lecture, 2022. I feel honored by this invitation since PV remains without doubt the most remarkable Hyderabadi of the 20th Century. While he did not have the opportunity to leave his imprint on this city, he brought the city itself into global focus leaving his imprint on the country as a whole. As I had said over a decade ago in the Waheeduddin Khan Memorial Lecture, that I delivered at the Centre for Economic and Social Studies here, in medieval times Golconda and Hyderabad were global centres with trading links to the Far East and the Mediterranean. This city has once again become a global city with links to the rest of the world, thanks to a range of businesses and institutions that are now housed here. This ‘second globalisation’ of Hyderabad occurred after the 1990s due to the new opportunities opened up for local and regional enterprise by the policies that we associate with Prime Minister Rao. Of course we should give credit to several Chief Ministers including Shri Vengala Rao, Shri Chandrababu Naidu, Shri Y S Rajashekhara Reddy and Shri K Chandrashekhara Rao. However, their new worldview, that has contributed to the development of this metropolis, was crafted within a policy paradigm that we now associate with PV.

In my book, 1991: How Narasimha Rao Made History (Aleph Books, Delhi, 2016), I say:
“The initiatives that PV took within a year of assuming office have since defined the post-Nehruvian era in India. The policy shift on the economic front was the more obvious of the changes and the one that received the most academic attention. Less appreciated have been the shifts on the foreign policy front, both within Asia and around the world, and the inter-relationship between the two. Finally, there was the new turn on the political front with the era of single party dominance giving way to an era of coalitions.”

“There is, however, one danger which we must guard against in the ‘opening up’ process. This could lead to wider disparities within society. To meet this situation, we have to enable the under-privileged sections to also derive the benefit of the new opportunities. This process would naturally need some time to fructify. Until that happens, there has to be a by-pass arrangement whereby benefits reach the lowest rungs of social pyramid directly from the State.”

“Influenced by the Great Buddha, Jawaharlal Nehru tried to mark a ‘middle way’ for us in all spheres. It was the same in Non-alignment in international relations, or in his concept of mixed economy with a ‘socialistic pattern of society’. …. To interpet Nehru’s Middle Way as being valid only in a bipolar situation is not to understand our ancient philosophy of the Middle Way, The Middle Way was meant to be a constant reminder that no assertion or its opposite can be the full and complete Truth. It meant that we looked for Truth in the interstices of dogmas, It means today that we will accept no dogma even if it happens to be the only dogma remaining in the field at a given moment. Our quest for Truth will still continue.”