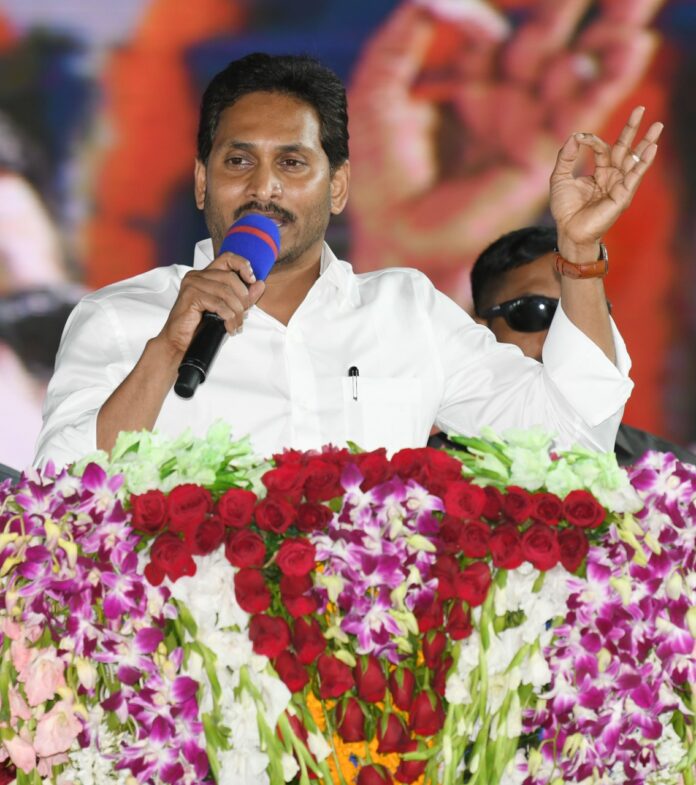 See the qualitative difference between YSRCP and TDP govts
AP CM draws contrast – Flays Chandrababu
Rajahmundry, Jan 3: Continuing his tirade against TDP President and his friendly media, Chief Minister Y.S. Jagan Mohan Reddy appealed to people to see the qualitative difference between the present YSRCP government which has been steadfastly implementing welfare schemes as per its election manifesto with the previous TDP Government that ditched every section of society and dumped its manifesto into the dustbin after coming to power.

Addressing a mammoth public meeting here on Tuesday after formally launching the hiked social pension that went up to Rs. 2750 from Rs. 2500 a month, the Chief Minister drew contrast between Chandrababu Naidu who backstabbed NTR and usurped power from him unceremoniously and a person who pretended to be an orphan who killed parents and sought remission in a court of law.

He said while he is feeling proud to implement his election manifesto and hike the social pension that benefits the downtrodden including the differently abled, widows, the aged, non-earning loners, AIDS-affected, bed-ridden people and even dialysis patients, the publicity-crazy Naidu is drawing pleasure by conducting meetings and road shows in congested areas for photo shoots and drone footage and thereby causing stampedes and allowing people to die.

While every section of society including women, BCs, SCs and STs suffered miserably as the TDP rule, aided by its friendly media, pursued the policy of plunder, stash and devour, now almost all sections of the society including fishermen, handloom workers, toddy-toppers and even the patients undergoing kidney dialysis are happy with the hiked pensions on which the Government has so far spent Rs. 62500 crores.

He said while the number of pensioners went up to 64 lakhs in YSRCP government from 39 lakh in TDP rule, the monthly pension bill also saw a steep hike from Rs, 400 crores during the TDP rule to Rs.1765 crores at present resulting in an annual pension expenditure of Rs. 21,180 crores.

The Chief Minister said that the publicity-mongering Naidu who claims to have 45-years of political experience and 14 years as CM never feels ashamed to garland NTR statue and shed crocodile tears for the sake of votes after backstabbing him, usurping his CM chair, grabbing the NTR Trust and confiscating his political party imprudently.

Here are the details
He said while the YSRCP government took the total number of rice ration cards to 145, 88,539 by adding 44543 new cards, Aarogyasri cards to 141 48249 by adding 144100 cards afresh and the house site Pattas to 30,29,171by distributing 14531more land sites by implementing various welfare schemes in utmost transparent manner. The TDP chief has been trying to regain his eroding credibility and clout by running false propaganda against the Government with the support of his friendly media.

Observing that the state is witnessing a fierce war between the poor and the capitalists that wants to deny English medium schools and welfare measures to the downtrodden, he said he always sides with the poor and will continue his welfare schemes with the blessings of God and support of the people.