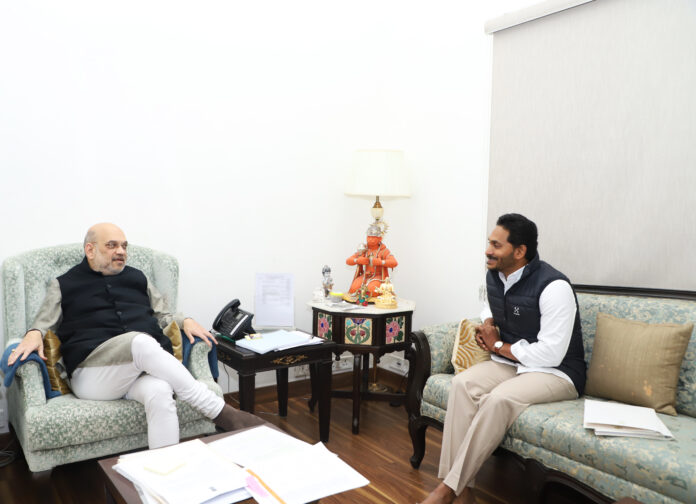 Ap CM meets Shah at Delhi
Requested HM to release pending funds
New Delhi, Dec 29: Chief Minister YS Jagan Mohan Reddy met Union Minister Amit Shah here on Thursday and requested him to consider setting up of National Forensic Sciences University (NFSU) Campus at Tirupati.
The Chief Minister, who also reiterated the issues raised before Prime Minister Narendra Modi and Environment Minister Bhupender Yadav, has sought setting up of the NFSU campus to cater to the growing requirement of forensic experts in South India and assured that his Government would allot the required land.
He further explained that Tirupati has grown into an educational hub and the setting up of NFSU would serve the demands of growing need for criminal investigation infrastructure.

He urged the Home Minister to work towards releasing the pending arrears of Rs. 32,625.25 crore which includes resource funding of Rs. 18,330.45crore for the fiscal 2014-15 and pension arrears, reimbursement of Rs. 2,937.92 crore spent by the state government on the Polavaram Project from its own coffers so far and resolving other pending post-bifurcation issues between AP and Telangana. The Chief Minister also sought his intervention in collecting the arrears of Rs. 6,886 crore outstanding from Telangana Discoms to the APGENCO.
The Chief Minister further requested him to fix the Polavaram Project cost as Rs. 55,548 crores as recommended by the Project’s Technical Advisory Committee, do away with the policy of treating the project cost component-wise as it escalates the cost besides delaying the project, amend the flawed provisions of the National Food Security Act, grant 14 more medical colleges to the state, allot mines to meet the iron ore requirement of the steel plant being built at Kadapa and extend all cooperation to the proposed 76.9 km long Metro Rail Project in Visakhapatnam.

He also urged the Home Minister to intervene and restrain the Telangana Government from acting unilaterally and violating operational procedures in drawing Krishna River water and generating electricity and grant environmental clearances for the Rayalaseema Lift Irrigation Scheme (RLS) through which 3 TMC water per day can be supplied to TGP, SRBC and GNSS,