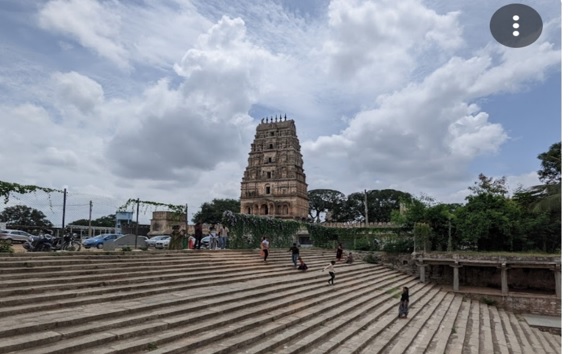 SOME FACTS ABOUT RAMA AND KALI TEMPLES
(Dr. Shankar Chatterjee, Hyderabad)
As a permanent resident of Hyderabad, I am proud of my city because Hyderabad has
become a hub of trade and commerce, popularly known as the City of Pearl, and an
international centre for information technology (IT). In addition, there are many
pharmaceuticals, and other industries located here. Tourism including medical tourism has
grown in a massive way and for this, people both from other parts of the country and from
foreign countries come here. The most attractive food in Hyderabad is biryani. I have
observed in many cities of India there are some food stalls where on the signboard it has been
mentioned that Hyderabadi biryani. Anyway, there are many places from the tourists’ point of
view. These among other things include the Salar Jung museum, Charminar, Golconda Fort,
Ramoji Film City, Birla Mandir, Lumbini Park, etc.  In addition, I am presenting cases of two
temples one very old and another newly constructed which are not much discussed in our
country although very popular because of architects and film shootings. These two temples
are Sri Rama Chandra Swamy Temple and one Swarna Shilpi Vivekananda Kali Mandir and
I had the opportunity to visit both the temples on 1 December 2022.

Sri Rama Chandra Swamy Temple
Sri Rama Chandra Swamy Temple of Ammapally,
Samshabad Mandal of Ranga Reddy district is a very ancient temple and famous for film
shootings mainly Telugu films. As per the different literature, the temple was built by Vengi
Kings in the 13th century but the idols (Murtis) were 1000 years old. The temple is decorated
with a large seven-story tower which is quite famous among Telugu movie fans. There isa
large Bhagawan Vishnu in a sleeping posture above the gateway of the tower. For the benefit
of readers, it may be mentioned that Vengi isa delta region spread over the Krishna and
Godavari rivers, the region is also known as Godavari Delta. The capital city of Vengi was
located at Pedavegi near Eluru. The idols (murtis) of Sri Rama, Sita Mata, and Sri Laxman
were beautifully created from a single black rock. Anjaneya (Bajrang Bali), normally seen
with Bhagawan Rama is not seen in the sanctum sanctorum. Instead, Anjaneya Swamy’s idol
(murti) can be seen  near the Dwaja Stambha ( Dwaja means Flag and Stambha means pillar)
facing Sri Rama. Also, it may be mentioned that there is an old pond located there. The
surroundings of the pond are planted with coconut trees and a wonderful view.

Auspicious tollywood industry
By visiting the temple and its premises many other things can be seen. But I was fascinated watching the
pristine beauty of the area. Sri Rama temple is an auspicious place for the Tollywood film
industry as they believe shootings of the films would cause great success with the blessings
of Sri Rama, Sita Mata, and Sri Laxman. As we know Sri Rama temple means Rama Navami
so Sri Rama Navami is celebrated with great hype and enthusiasm at this temple every year.
When I visited the temple in the first week of December 2022I really felt happy because neat
and clean premises. Moreover, around 80 Swamiye Ayyappa devotees including a few
children were staying for many days as per their programme. I was told they would go to
Swamiye Ayyappa temple in Kerala from this Sri Rama temple. Also on the premises, one
person and his wife both were highly educated and had started one shop preparing tea, coffee,
other beverages, snacks, etc shop mostly organic foods. I really appreciate the food items and
coffee which I enjoyed there. I suggest to the Government of Telangana, to attract tourists
from India and abroad to make wide publicity so that many people can know about the
temple and subsequently can visit.

Replica of Kolkata temple at Narkhuda
Swarna Shilpi Vivekananda Kali Mandir is situated at Narkhuda village, Shamshabad
Mandal of Ranga Reddy district. This is a replica of the Dakshineswar Kali temple of Kolkata
which is located on the bank of River Hooghly in Kolkata (an old temple).   Anyway, Swarna
Shilpi Vivekananda Kali Mandir is built by the Bengali Swarna Shilpi (Swarna Shilpi in
Bengali means goldsmith) community on a 2-acre land in the initial phase. Later on, the
temple committee purchased 1000 square yards of land for the construction of a guest house
(5 -storied). In 2010, 21 Bengali goldsmiths (Swarna Shilpi) decided to construct a temple
that will be a replica of the Dakshineswar Kali temple in Kolkata as there is no such temple in
Hyderabad. In that year they could purchase two acres of land from a Bengali person, Rabin
Chandra Laha.  One Barun Kumar Rana, present General Secretary of the temple committee
visited the Dakhineswar temple in Kolkata and after lots of persuasions got the design of the
temple. And thus, the present temple at Narkhuda could be constructed.
During the construction of the temple, no engineers were employed and all workers were
either unskilled or skilled. The construction work was initiated in 2011 and completed on 28
January 2020 which is known as ‘Temple Established Day’ (Protista Day). Around an
amount of Rupees 20 crore was spent for the construction of the temple which was
exclusively the people’s money. Of course, the villagers of Narkhuda and Kavagura (all
Telugu people) who stay within the vicinity of the temple fully cooperated during the
construction time also their cooperation to date is available.

Idols brought from Kolkata
Murtis (idols) of Mata Kali, Bhagawan Shiva, Ramakrishna Paramhansa Dev, Sharada Maa,
and Swami Vivekananda were brought from Kolkata. On the other hand, murtis (idols)of
Bhagawan Ganesh, Bhagawan Balaji, and Bhagawan Radhakrishna were brought from
Jaipur, Rajasthan. It is pertinent to mention that one Marwari business person, Narendra
Mishra fully contributed money to construct the Shiva temple.
In addition to celebrations of festivals like Ratha Yatra, Durga Puja, Kali Puja (Diwali), and
temple opening day (28 January), the temple committee organizes two times blood donation
camps mainly for thalassemia patients. Between 150 and 200 units of blood were collected
during the donation time. Also, nearby one blind school and one anath ashram (orphanage
home) are located and the members of the temple committee donate there from time to time.
Near the temple, there is a beautiful tank which is another attraction.

Also, recently the
temple committee purchased 1000 square yards of land for the construction of a five-
storied guest house. One highbred cow is reared in the temple premises and milk is used for
making sweets etc., for puja purposes. In addition, I observed three small shops doing
business in a small way on the premises of the temple – one for tea, puffed rice, and local
snacks, another one for different types of eatable fried items, and other one for selling
flowers, etc. I was told no rent is collected from them.
Road shall be made accessable
Before conclusion, it may be mentioned here that the main road to approach road connecting
the temple is not good so my personal request to Telangana Government is to take measures
for the construction of a good road so that visitors can go to the temple without much
hassle.
(Dr. Shankar Chatterjee is a former Professor & Head (CPME), NIRD & PR,
Hyderabad)