An IAS Officer with multiple talents 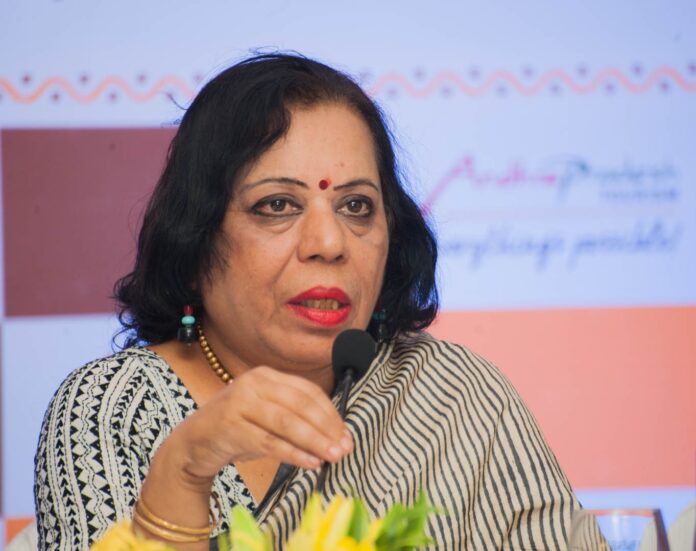 Served public with commitments
Besides her profession written many books
Established Art gallery in Hyderabad
(Dr Shankar Chatterjee)
Recently, I have gone through an excellent and insightful book titled “Yatrapath Yuddhopath” written in Bengali by a former Indian Administrative Service (IAS) officer and an erudite scholar Chandana Khan madam. After completing her master’s degree in English Literature from Jadavpur University, Kolkata joined in Indian Administrative Service in united Andhra Pradesh. This scholarly publication is in Bengali, so I have enjoyed each and every line. It has been published by Virasat Art Publication, Kolkata in 2021. Regarding madam, I wish to mention a few lines. She retired as Additional Chief Secretary of Andhra Pradesh cadre (her batch was 1979). Undoubtedly, she was a successful administrator as during her carrier whichever department she worked in, she left a footprint which many told me also. Moreover, she is endowed with other prowess. She earned name and fame in painting and has developed a beautiful art gallery known as Pegasus Art Gallery in Hyderabad which is a big hit and very popular among professional artists of all ages. Further, she is excellent at writing both in Bengali and English and published a good number of books on stories and poetry in both languages.

Anyway, an IAS officer Ardhendu Sen sir who was her batchmate, but West Bengal cadre has written the foreword. Sri Sen has appreciated her dynamic rule and arduous work in the development of tourism in United Andhra Pradesh for which three times United Andhra Pradesh got first prize in tourism from the Union Government. In this context, I wish to mention that last three decades, I am staying in Hyderabad and travelled across Telangana and Andhra Pradesh and observed many people had high respect for Madam.
There are altogether 18 chapters in this publication reflecting her experience during the IAS period. Also, there is an epilogue and a summary which in Bengali has been mentioned as “Porisistha”(ending part). I wish to mention that I had the opportunity to interact with her on several occasions and observed she is highly knowledgeable, an erudite scholar and a successful administrator. Her great asset is down-to-earth mentality, so she accepts all people as equals. In the first chapter, the author has highlighted her experience while she was in Mussoorie for IA Straining. Interesting points as found in the book are that trainees were from across the country with different languages depicting mini-India, but all used to communicate either in Hindi or in English.

I also feel Hindi, and English are sine qua for communication in our country as ‘Unity in Diversity is our strength. I visited many countries and observed no country has much diversity among the people which can be found only in India. After completion of the training, she was posted in Visakhapatnam. In her experience, she narrated a sad incident; she along with her collector used to visit different places for monitoring the projects, or for assessing the ground situation, etc. In one of the meetings, as usual, many officers attend. After completion of one such meeting, when she along with the collector was returning by car the secretary of the collector informed that the particular Block Development Officer (BDO) had attended in spite of a sad event as his10 years old son passed away because of snake bite and after performing rituals in the wee hours the BDO attended the meeting. By reading this, my eyes were full of tears.

In other different chapters, she has described her experience in different places – while she was in Rajahmundry, Kadapa, Tirupati -Tirumala, Srikakulam, etc. In addition, she has lucidly explained in 1983 how NT Rama Rao Garu (Garu is a respected word in the Telugu language) could come up in the political limelight by forming Telugu Desam Party (TDP). According to her, frequent changes of the Chief Ministers by the Congress High Command created furore among the people of united Andhra Pradesh which helped NT Rama Rao Garu to come up. Also, the author has narrated her experience when N. Chandrababu Naidu Garu was the Chief Minister and Naidu Garu entrusted her to develop tourism in united Andhra Pradesh which successfully she implemented, and now Andhra Pradesh/Telangana is in zenith in the field of tourism. Also, the author has elucidated in order to develop rural areas Naidu Garu launched the ‘Janmabhoomi Scheme’. The author was sent for a study in England during 1992- 93 and her experience lucidly has been jotted down here in one of the chapters.

In the chapter on Public Private Partnership, which is popularly known as the PPP model, she has elucidated ‘Swiss Challenge ‘model, and such a model worked out well in united Andhra Pradesh in those days. In the last chapter titled “Porisistha”. The author with a dejected mood highlighted how Y.S. Rajasekhara Reddy Garu, popularly known as YSR, the 14th Chief Minister of Andhra Pradesh behaved with her because of a past incident. And sent from tourism department to less important department i.e., ‘Commissioner of Enquiry’.
I congratulate the author for penning down her experience lucidly and meticulously. My suggestion is that this beautiful publication may be published in English and Telugu, if possible, in Hindi also so that many people can read it.
(Author is former Professor & Head (CPME),NIRD & PR ( Govt. of India), Hyderabad)