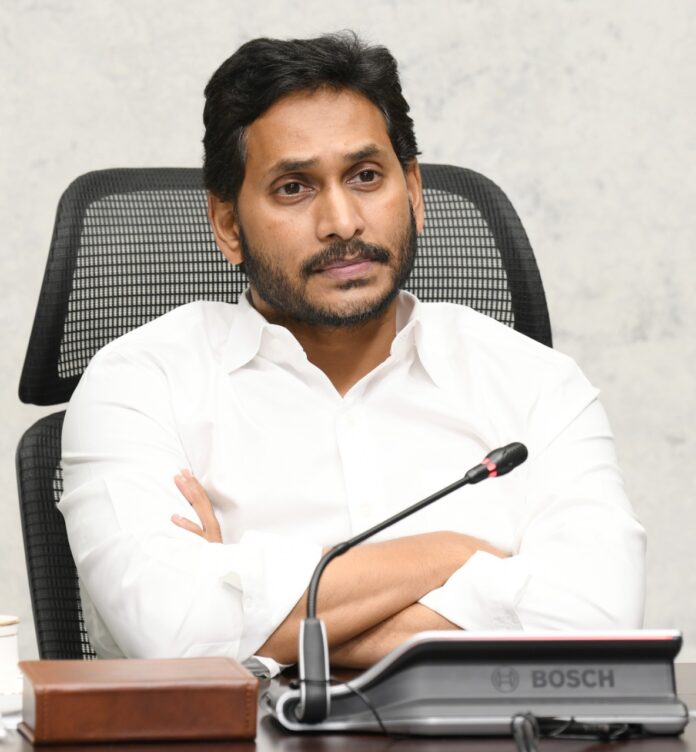 Video Conference with Collectors and Sps
Discussed various issues with them
Amaravati, Sept 29: Chief Minister YS Jagan Mohan Reddy held Spandana video conference with District Collectors and SPs on a vide ranging of subjects, including Gadapa Gadapaku Mana Prabhuthvam (Our Government to every doorstep), NREGA works, e-cropping, YSR Urban, Village Clinics, Housing, House sites, Jagananna Bhu Haku- Bhu Raksha Survey, Spandana petitions, land acquisition for national highways among others.
Gadapa Gadapaku
The Chief Minister said Rs 20 lakhs are allocated for each village and ward secretariat for carrying out the works sought by people in each secretariat, and this should be expedited with priority, he told the officials during the Spandana held here on Thursday.
We are covering 15,004 village and ward secretariats under this programme, which will be personally monitored by the CMO, and MLAs and mandal level staff should cover at least six secretariats. They should stay with the staff for two days and cover every house making it a point to spend at least six hours taking the programme forward.

After the two-day tour, works must be prioritized from the representations given by people and sanctions accorded which should be carried out on a war-footing and ensure that they begin within one month. Unless the stipulated timeline is adhered to, the works cannot be done and the works that were not allocated till now should be completed by October 5.
Agriculture
The Chief Minister Insisted that e-cropping must be done one hundred percent under the supervision of District Collectors.
The officials said 96 per cent of the 107.62 lakh acres was covered in the first phase and remaining four percent will be covered by September 30. The details should be furnished with photographs from the fields with farmers by September 30, he said.
In the second phase, by October 3 Village Agriculture Assistant, VRO should authorise it through bio metric system and KYCs of farmers should be completed by October 10. From the same date, farmers should be given digital and physical receipts and should be completed by October 15. By October 25, final list of e-cropping should be displayed at RBKs and it is the responsibility of the Collectors to see that it is done as per schedule. At least 10 percent of e-crop should personally be examined by MAO and MROs while RDOs and AVAs should examine at least six percent and DOs should see five percent, JCs must go through 2 per cent and Collectors should examine personally one percent.

NREGA works
The Chief Minister said that 17.05 crore workdays were created, and the average wage was Rs 210.02 which should be increased to Rs 240. We should get Rs 1400 crores from Centers towards NREGA works and once they come, we will release them. The Chief Minister told the officials to expedite woks of village ward secretariats, RBKs, YSR Health Clinics. In 4500 village secretariats internet services should be provided by December and take steps for setting up of digital libraries and Collectors should take steps to complete works on digital libraries in the remaining places.
In the Village Secretariat Complex at Velpula in Pubivendula constituency, nearly 30 people are using the digital library for work-from-home and special care should be taken to this facility.

Housing
While housing works are good in SPSR Nellore, West Godavari, Bapatla, Eluru and Kunool districts focus should be laid on Satya Sai, Prakasam, Anakapalle, Krishna and Ananthapur districts.
We are building 1.24 lakh houses in Visakhapatnam and steps should be taken to begin the works in October. Nearly 85 percent of basic amenities like borewell, power connections, approach roads, CD works and godowns are completed and Collectors should take steps to expedite the works.
Efforts should be on to complete five lakh houses by December 21. In Jagananna Colonies, the goal should be to complete 3.5 lakh houses and 1.5 lakh TIDCO houses. Power, water and drainage works should be in place when the houses are completed.
Collectors should take up action place for phase three for the remaining beneficiaries and steps should be taken for allotment in December. There should be an audit with the aim of giving pattas and possession to beneficiaries and this process should be completed within 20 days.
By December 1.75 lakh TIDCO house would be given and Collectors should take steps accordingly. The Chief Minister said that works on Jagananna Bhu hakku, Bhu Raksh survey should be taken up as per SOP.

Spandana
Spandana should be held at Village and Ward Secretariats from 3.00 to 5.00 PM daily in which officials from District Collectors, downwards should be available. There should be a humane touch in dealing with Spandana petitions, he said.
The District Collectors should monitor SDGs and upload data and assessment will be done based on this performance.
Disha App should be downloaded in every house and the ACB number 14400 should be displayed at every Government Department and SEB number 14500 should be visible at every College.
Collectors should focus on land acquisition for National Highways, he said.
CM’s Principal Advisor Ajaya Kallam, Chief Secretary Sameer Sharma Agriculture Department Special CS Poonam Malakondiah, Land Administration Chief Commissioner, G Sai Prasad, Housing Special CS Ajay Jain, Transport Medical and Health Chief Secretary MT Krishna Babu, AP TIDCO MD, Ch Sridhar, Municipal Administration Commissioner Praveen Kumar, Agriculture Commissioner Hari Kumar and other officials were present.