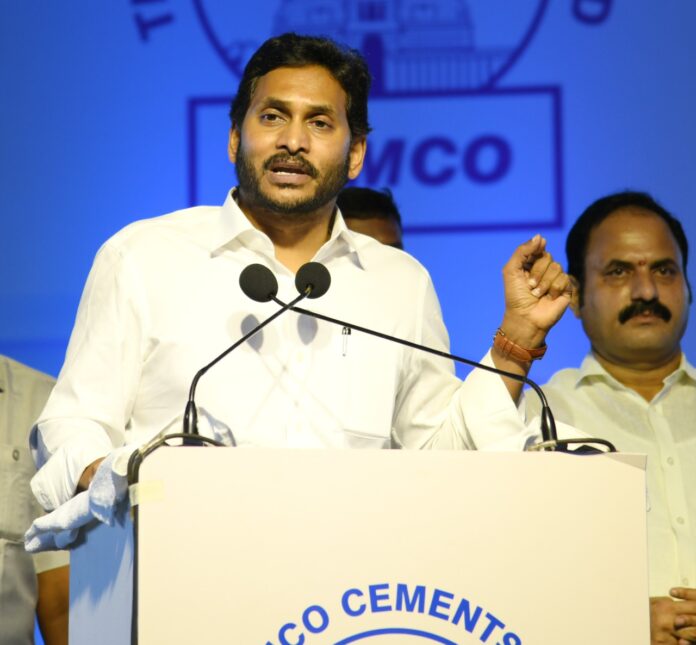 Nandyal, Sept 28: Asserting that the proactive policies of the Government are paving way for rapid industrial growth, Chief Minister YS Jagan Mohan Reddy said the conducive atmosphere and transparent policies reflect in the top rankings in Ease of Doing Business the State has been getting.

Addressing a large gathering after commissioning the Rs 2,500 crore Ramco Cements at Kalwatala near here on Wednesday, the Chief Minister congratulated the Ramco group for coming to Andhra Pradesh and starting the unit in record time which would be providing jobs to over 1,000 and said that they would provide all help in further expansion of the unit.

‘The Chief Minister is just a phone call away and the government will render all help to you in the manner it should be rendered,’ he said. Ramco unit could come to steam in just 30 months which speaks of the cooperation and support our government has extended and same will continue in running the plant, he said adding the clinker and grinding capacity would take the production to 3 million Tonnes. Despite heavy limestone deposits in the region, there was no development earlier and with the unit coming a new chapter has begun.

Stressing the need to promote green energy, the Chief Minister said that if farmers come forward an annuity of Rs 30,000 per acre would be paid to them and the government will enter into an agreement with them with hike of five percent lease amount every three years. The land would be utilized for setting up of renewable energy like solar and wind and the local MLAs and others can work on it and it would be better if a cluster of 1,500 to 2,000 acres is formed in the region for generating 500 MW power.

Recently we have laid foundation stone in this region at Kurnool for 5400 MW renewable energy projects of solar, wind and pump storage projects of Grenko group which would provide 2600 jobs. We have also given the nod for Indosol, Arcelor Mittal, and Aurobindo and Adani groups for an investment of Rs 72,188 crore providing 20,000 jobs to locals as 75 percent reservation for locals are in place.

We could get top ranking in EoDB in the country for the past three years and the format seeks feedback from the industries for the grading which shows how conducive the atmosphere is for industrialization besides achieving 11.34 percent growth rate in 2021-22
Recently we have started RS 1000 crore unit of Grasim industries where 1150 jobs were created and in the Apache Group at Chittoor and Pulivendula Rs 700 crore investments had come in giving jobs to 10,000. Investment have also come in through TCL Panels worth Rs 1,700 crore providing jobs to 3100 and ATC Tires in Vizag, Rs 2200 crore investment and 2,000 jobs.

We have also started four ports and nine fishing harbours which will help the exports to double from Rs 1.70 lakh crores to Rs 3.4 lakh crore in five years. The three industrial corridors, mega industrial hub and EMC at Kopparthi and one more in Chittoor would be coming up and the youth would be getting jobs, he said.