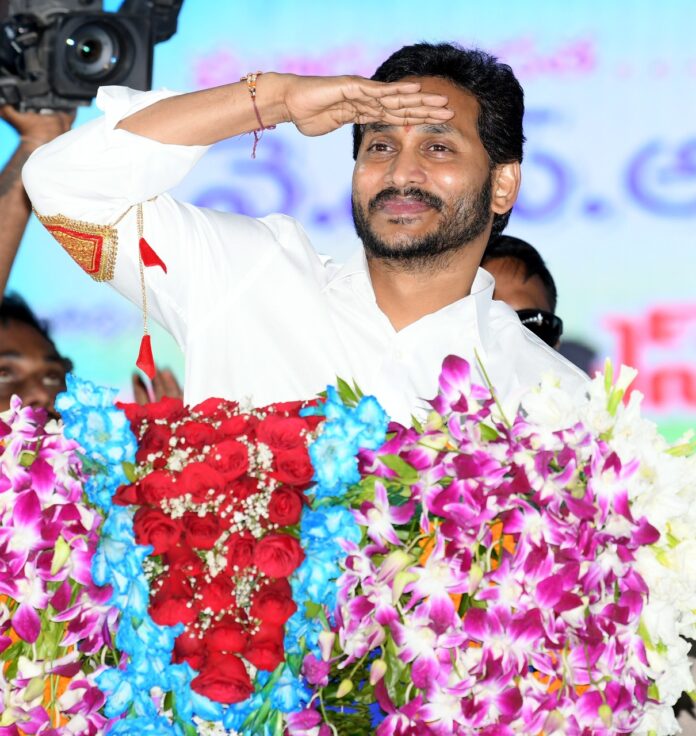 Pension hike from January
YSR Cheyuta 3rd in a row launched
Chitttoor, Sept 23 : Affirming that Kuppam constituency has seen development after we took over the reins, Chief Minister YS Jagan Mohan Reddy announced the pension amount would be hiked to Rs 2,750 from January onward.

Speaking at the Cheyutha disbursement function held at Animiganipalle, near here on Friday, the Chief Minister said unlike the previous Chandrababu government, in our government all sections of people are experiencing the development which is tangible all over.

He also announced the hike pensions to Rs 2,750 from Rs 2,500 with effect from January and said it will reach the promised figure of RS 3,000.

Describing YSR Cheyutha as a scheme which helps SC,ST, BC, Minorities women in running their families and bringing in a major change with the empowerment, the Chief Minister said, a weeklong Cheyutha festival would be held at Kuppam.

Elected representatives will visit each house from mandal level and share their happiness that comes with the scheme.
For the third consecutive year, 26.39 lakh beneficiaries are receiving the amount of Rs 4,949.44 crores directly into their bank accounts.

In all the Government has given Rs 3.12 lakh crores under DBT and non-DBT of which Rs 2.39 lakh was given only to only to women.
All this was done with transparency without any discrepancy, just with a click of button.

You have to see the difference between the previous government and ours. We have given you the choice of the manner in which you want to spend the amount and have made arrangements for technical help and facilitate your option, he said.

While the budget remains the same during the previous and our government, why they could not carry out the welfare schemes while we have been carrying out with transparency, he said.

Listing out the development done in Kuppam, the Chief Minister said water to Kuppam canal, municipality status to Kuppam, Revenue division was given by Jagan while Chandrababu, who was Chief Minister for 14 years before could not take up any development activity. He is known for his backstabbing politics.

From Rs 6.5 crore Reddipalli Ramkuppam power substation to Railway under bridge, to integrated office complex to sanctioning of Rs 20 crores to Dravida University all were done by this government, he said.

Chandrababu who was Kuppam MLA for 33 years had used the BC vote bank but did nothing to them in contrast to the plethora of our welfare schemes. He also said that the local MLC Bharth has been part of implementation of the schemes and told people that this is your government.