Azad Exit, A Wake Up Call for Rahul 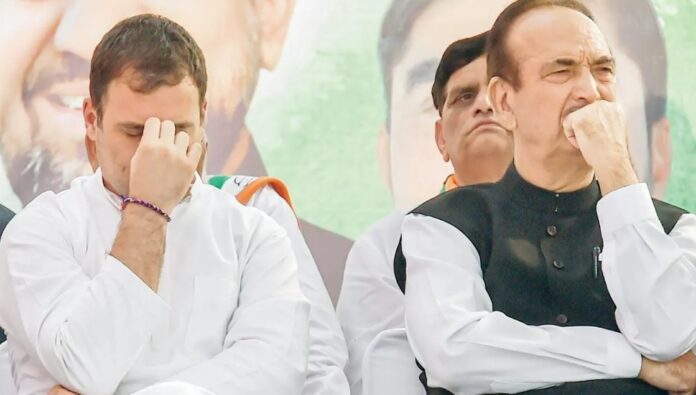 (Anita Saluja, New Delhi)
“Congress Party is finished. It has no future!” This is how senior-most Congress leader Ghulam Nabi Azad, who spent five decades in the 137-year-old party, described the Congress, in an interview, after leaving the party. According to him, it is a party of sycophants, where no consultative and candid discussions can take place. For a party, which is fighting an existential crisis, where Senior & Young leaders are deserting the sinking ship, can the party ever be rejuvenated?

Rahul Gandhi was insulted by the BJP day-in and day-out, projecting him as Pappu, an image which still personifies him. However, what irked his partymen was his arrogance, his immature style of functioning, his dependence over his coterie and his rebuking of the seniors, who have struggled all along with the party, decade after decade. Ghulam Nabi Azad has listed out a few instances, including his snubbing of Prime Minister Manmohan Singh and the entire Cabinet by tearing up the Ordinance in public.

Now, once again, the party is all set to elect the Congress President, chosen by the Nehru-Gandhi Dynasty, who will run the party as a Proxy for Rahul Gandhi, unless he decides to take up the responsibility. By October 19, the results of the elections will be known. This time, the party is likely to declare someone like K C Venugopal, Ashok Gehlot, Ambika Soni, P Chidambaram, Digvijay Singh, Mukul Wasnik, or anyone of the confidantes chosen by Rahul, who can just obey his diktat. Any younger face would obviously harm the interests of the Gandhis, if ever he decides to ditch them mid-way.

In fact, most of the young charismatic leaders like Jyotiraditya Scindia, Jitin Prasad, Himanta Biswa Sarma, Sushmita Dev and R P N Singh have already deserted the party, while others like Shashi Tharoor and Manish Tewari are waiting for an opportune moment. They have started raising the banner of revolt, with the former hinting at contesting the elections for the post of Congress President and the latter insisting on making the electoral rolls public.

Instead of introspecting and heeding the advice of party leaders for implementing reforms in the party, Rahul Gandhi has been functioning unilaterally, denouncing the consultative mechanism in the party. Those who surround him are immature young people, lacking expertise in running a political party. Ever since Sonia Gandhi has been unwell, she has been depending upon Rahul Gandhi to take all crucial decisions, who, without consulting the seniors, has thrust his decisions on the party.

Seniors like Ahmed Patel, Ghulam Nabi Azad, P Chidambaram, Bhupinder Singh Hooda and Anand Sharma were all sidelined. The hand-picked fresh faces like Kanishka Singh, Alankar Sawai and Kaushal Vidyarthee, who are political novices, formed part of his coterie. Senior party posts like Leader of Opposition in Lok Sabha went to Adhir Ranjan Choudhary, which was deserved by Manish Tewari, or Shashi Tharoor, as Sonia Gandhi was insecure with the promising talent in the party. Sonia was afraid that youngsters like Sachin Pilot, Jitin Prasad, Jyotiraditya Scindia and R P N Singh would overshadow her son Rahul Gandhi. Fully aware of Sonia’s apprehensions, most of these youngsters left the party with a heavy heart, while others like Sachin Pilot are still waiting for their turn.

Azad deserted the party at a crucial time and held his own rally in Jammu to announce the launch of his regional outfit when Rahul Gandhi held a massive rally, Mehangai Par Halla Bol in Delhi. Later, Rahul will also be actively participating in the Bharat Jodo Yatra from Kanyakumari to Kashmir from September 7. Those associated and attached with the Congress for decades, still hope that the party will be revived. Earlier, the Congressmen exhibited their strength and unity on the streets of Delhi, when both Rahul Gandhi and Sonia Gandhi were summoned by the Enforcement Directorate on the disproportionate assets case. Similarly, when all the three –Rahul, Priyanka and Sonia — were present to protest against Price Rise, observing Black Day, the Congressmen were ecstatic and zestful.

The Gandhis, it seems, have realised that time has come for them to show their sincerity and commitment for the party, which gave them name & fame. The Congressmen have been waiting for three long years to hear from Rahul Gandhi on taking up the reins of the party. However, now, they, too, are fed up and want plain answers from him — Yes or No. If he refuses, they want a full-fledged Congress President, who should be accessible and conversant with them. They don’t want any proxy leader, who works for the Gandhis. The Manmohan Singh-Sonia Gandhi formula doesn’t work for the smooth functioning of the party, as was the case when the duo ran the Congress-led UPA Government. There cannot be two power centres in the party alone.

The Gandhis should learn from their past mistakes and go ahead to carry out reforms in the party, as envisaged by the G23. The Seniors & the Young, who have deserted the party, should be invited to return to the party-fold, to make it more robust, vibrant and kicking. Allowing them to form their own regional outfits will only harm the prospects of the Congress. In Jammu & Kashmir, almost all have left the party to join Ghulam Nabi Azad, with the result that the Congress will have to begin from scratch. Like J&K, there are several States where the Congress has minimal prospects of forming the government, including major States like Uttar Pradesh, Maharashtra, West Bengal, Bihar, Gujarat, Andhra Pradesh, Odisha, Tamil Nadu & Puducherry, which account for as many as 321 seats in the Lok Sabha.

Given this grim scenario, ironically Azad, who spent his entire life in the party, has declared the Congress as finished. The same rhetoric, which one used to hear from the Prime Minister. But seeing the massive support, which the Congress agitations are drawing on the streets, it seems that all is not over yet. The Congress can still be revived, provided if Rahul Gandhi finally wakes up now. He should mend his ways, hold elections democratically and allow the most charismatic, popular and talented leader to hold the reins of the Grand Old Party of the country. Let the Congressmen have their way in electing their own leader. If he so desires, Rahul Gandhi can opt to be one of the contenders in the poll fray. However, the party must come clean on this, make the electoral rolls public in the interests of transparency, in order to prove that indeed, elections are being held in a free & fair manner.

Time has come for the Gandhis to show that they do not merely hold the glue that unites the party, but also a sincere commitment to revive the party. “The Congress is not finished. It still can be revived,” should be the pledge of the Gandhis, as they move ahead, with the Bharat Jodo Yatra.

(The writer is Delhi-based senior journalist and political commentator. Views are personal.)