Rs 4700crore to be credited under YSR Cheyuta 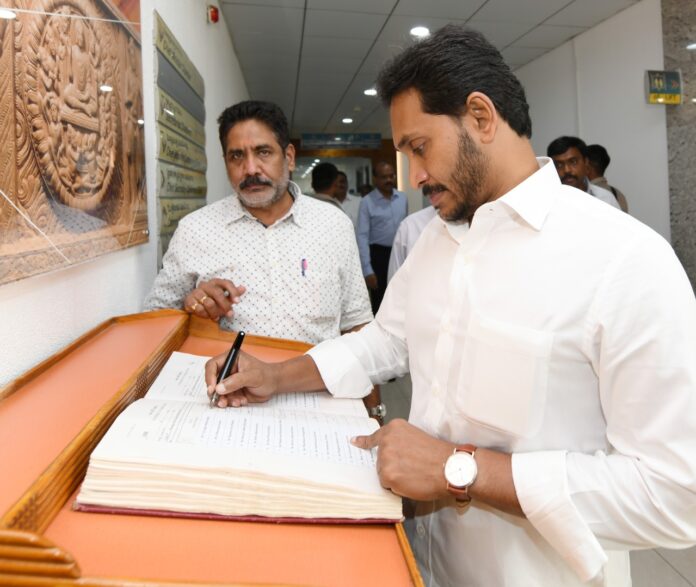 Ap Cabinet takes key decisions
Amaravati, Sept 7: Andhra Pradesh government has taken key decisions in the Cabinet meeting held here under the chairmanship of Chief Minister YS Jagan Mohan Reddy.
Under YSR Cheyutha Rs 4,700 crores would be transferred into the accounts of 25 lakh beneficiaries on September 22. The scheme aims at providing financial assistance of RS 18,750 each to SC, ST,BC Minorities women in the age group of 45 to 60 annually.

Under Jala Jeevan Mision, government has approved the guarantee to NABARD in six districts for drinking water a loan of Rs 4020 crore.
The cabinet ratified the decision taken to declare probation of the employees of village and ward secretariats and Rs 20 lakh has been sanctioned to each secretariat for Gadapa Gadapaku Mana Prabhutvam programme. Administrative sanctions to one lakh houses under greater Visakha Corporation, including 3,750 houses in Anakapalle, also got the cabinet nod.
Sate wide 21.30 lakh houses were sanctioned under Navaratnalu.

Four percent reservation should be given to differently abled persons in all Departments. The Cabinet decided to provide 85 additional posts In GAD, and the staffing pattern in AP Vaidya Vidhana Parishad would be changed.
The Cabinet also resolved to strengthen the State Architect Wing in Highways and Buildings Department and sanctioned eight posts.

The Government agreed to give guarantee of RS 1600 crore bank guarantee for Amaravati phase 1 for basis amenities. The cabinet has also given the nod for amending APCRDA act 2014 and APMR and UDA Act 2016 for the works undertaken by State and Central governments.
The R and R package to the Paidpalem project will be given on the lines of Gandikota DPs. To increase the scope of Bhavanpadu Port the Indian Ports Act 1908 would be amended.

The State agreed to provide guarantee for Rs 1000 crore loan from SIDBI for secondary food processing units.
All decisions taken in the SIPB in the meeting chaired by Chief Minister YS Jagan Mohan Reddy got the cabinet nod. In all 1.25 lakh investment and employment generation of 60,000 would be coming in the state in industrial, power and tourism sectors.
The cabinet gave its nod for setting up permanent Lok Adalats in Nollore, Kurnool, Vizianagara and West Godavari districts with a staff of 40 members.

Kia Motors gets exemption in stamps duty while Oberoi group gets 30.32 acres land near Tirupati for five star hotel and a convention center.
Cabinet approved the amendment of GST.
Land allocation was approved for various departments and also as per the suggestions of Land Management Authority for industrial parks and others.

The cabinet also approved 134 acres of land in Kadapa for YSR Architecture and Fine Arts College besides other land allocations in other districts.
Cabinet nod was given to 1454.06 acres in Prakasam district for solar power plant and for setting up a new revenue division with Chintoor as headquarter.

The cabinet discussed about the distribution of tabs with preloaded content to Class VIII students and decided also provide tabs to 50,000 teachers and the total cost works out to Rs 650 crore.
The officials gave data for kharif 2022 to the cabinet.