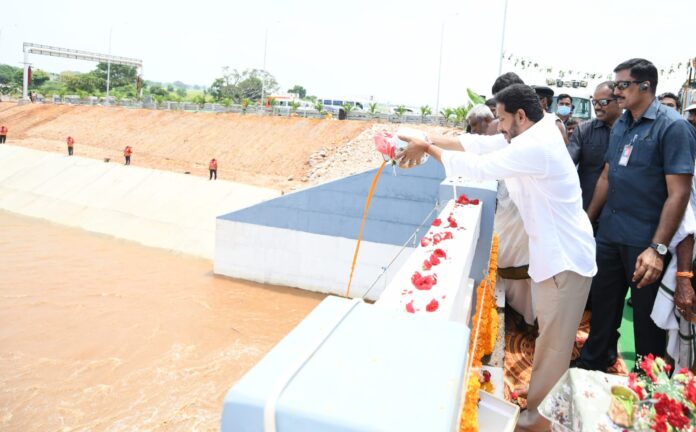 YS Jagan inaugurates Mekapati Gowtham Reddy Sangam Barrage
Nellore, Sept 6: Chief Minister YS Jagan Mohan Reddy has said, “not a single mandal in the state was declared drought prone since we took over and the Government has been giving priority to irrigation and has spend Rs 320 crore on the Sangam and Nellore barrages to stabilize five lakh acres and all the 26 irrigation projects from Srikakulam to Chittoor would be placed on priority basis and expedite them”.
Speaking after dedicating to nation the Mekapati Goutham Reddy Sangam Barrage and Nellore Barrage here on Tuesday, the Chief Minister said the two projects would benefit Atmakur, Kovur, Sarvepalli, Nellore rural and Kavali constituencies.

It is a tribute to Goutham Reddy, who was supposed to be here but for the tragedy, and we named the Sangam barrage after him which would irrigate 3.85 lakh acres, work on which was expedited. Though Corona affected just nine months after we assumed office, we overcome all odds and have prioritized the project. Despite floods in Penna River for two consecutive years, we could focus on the work and sped Rs 320 crores on both the projects, he said.

The barrages were built 140 years back by British and no one bothered to carry out repair works. It was only during the term of Dr YS Rajasekhar Reddy did the works start in 2006. As his son, I am proud to say I could complete the projects in my term.

For Nellore barrage also Dr YS Rajasekhar Reddy had spent Rs 80 crore and was neglected later which we completed now.

The Chief Minister has sanctioned RS 85 crore worth of works which include, connectivity to national highway from Sangam Barrage at a cost of Rs 15 crores and Rs 40 crore to the works on 12 irrigation works and RS 14 crores for laying roads to improve village connectivity, Rs 12 crore special grant for Atmakur municipality and Rs 4 crore towards drawing of water to Sangam Panchayat from the Barrage.