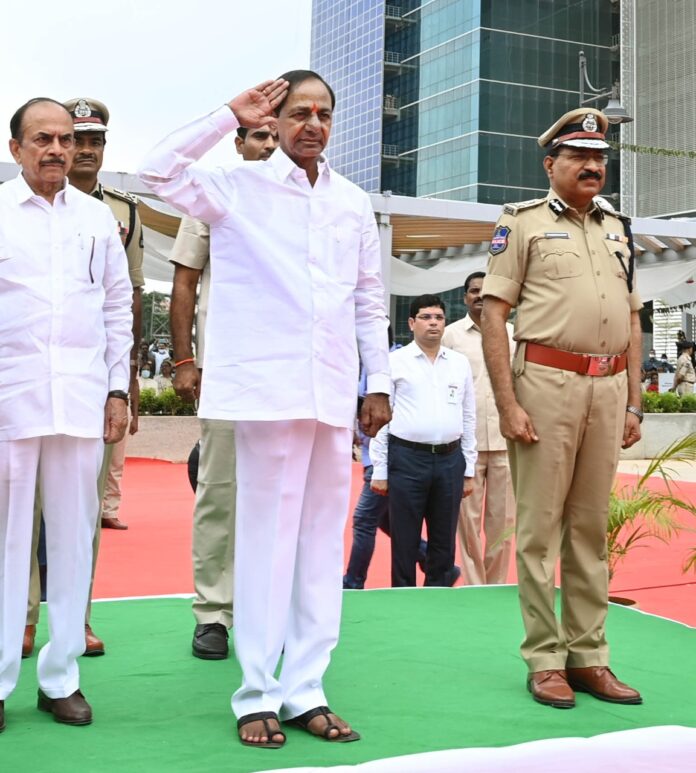 ” swatantra Bharatha Vajrotsava dwisapthaham ” celebrations
Hyderabad, August 21: Honble Chief Minister Shri K Chandra Shekhar Rao will be present as the chief guest
in the closing ceremony of “Swatantra Bharat Vajrotsavalu” held across the state from 8th of this month will conclude with the closing ceremony on Monday at L.B. stadium in the most magnificent manner.
Chief Minister Sri K. Chandra Shekhar Rao will be the chief guest in this closing ceremony where many national and international artistes will participate and perform various cultural programs.
On this occasion, along with the Chief Minister’s speech, the descendants of the Telangana warriors who participated in the freedom struggle of the country. Sportspersons from Telangana who have recently won medals in many international competitions and other celebrities will be honoured.
The closing ceremony will be held in the most amazing splendor for about three hours, which will remain in the history of 75 years of independent India.
On this occasion, there will be a musical concert by nationally renowned singer and music director Shankar Mahadevan, musical instrument vinyasam by Shivamani, classical dance performances by Padmashri Padmaja Reddy Troupe, Qawwali by Warsi Brothers and performances by local artists.
Short video presentation
There will be a short video presentation of the various programs organized on the occasion of this Diamond Jubilee Fortnight. Afterwards, the Vajrotsavam will end with a laser show and a massive firework display.
The state administration has made elaborate arrangements for around 30,000 people to participate in the closing ceremony. The state government has already completed the arrangements for state ministers, members of parliament, MLCs, MLAs, corporation chairmen, municipal corporation mayors, chairmen, DCCB chairmen, temple trust board chairmen, MPPs, ZPTCs and other public representatives to participate in the closing ceremony.
District Collectors have made arrangements to bring the officials from every district of the state to the LB Stadium on Monday. “Swatantra Bharata Vajrotsava dwi Saptaham” was celebrated as an ideal for the country
“Independent India Diamond Jubilee Celebrations” was inaugurated at HICC on 8th August by the Chief Minister KCR.
The two-week celebrations made today’s generation understand the sacrifices of freedom fighters including Mahatma Gandhi. Mass participation of people in the programs organized from 8th
On this occasion, the highlight of the festival was the free screening of the film ‘Gandhi’ based on the father of India, Mahatma Gandhi, to the children of government and private schools in the state.
Around 23 lakh students and young people watched Gandhi’s movie for the first time in the country.
Screening Gandhi’s film on such a large scale has set an example for the country.
Officials of several states in the country have asked Telangana officials for details regarding this.
CM KCR’s call to hoist the national flag all over the state and sent one crore and twenty lakh national flags to every house in the state. The people of Telangana created history by hoisting flags in their home.
These national flags, which were completely manufactured by local weavers, were hoisted in all the houses and displayed the spirit of nationalism.
As a part of Vajrotsavalu, Mass recitation of national anthem at Abid’s Nehru Chowk will remain in the history of the country.
The Chief Minister participated in the Mass recitation of national anthem on 16th of this month at 11.30 a.m. and ignited the spirit of freedom for the nation. It was witnessed by the First Prime minister of India statue at Nehru Circle, Abids.
On the occasion of Vajrotsavam, setting up independent Vajrotsavam Parks, Planting of lakhs of sapling under harithaharam, organizing poetry gatherings under the auspices of the Department of Language and Culture, conducting Mushairas, cultural programs in all district centers including Rabindra Bharti, rangolis, organizing various competitions for school children, freedom lovers , democrats, attracted world attention.
On this occasion, the State Sahitya Academy organized a special book exhibition on Gandhi’s ism at LB Stadium was very impressive.
The Vajrotsava Sangeet Vibhavari organized by GHMC and H MDA jointly in 75 parks of Greater Hyderabad today has impressed the residents of the city.