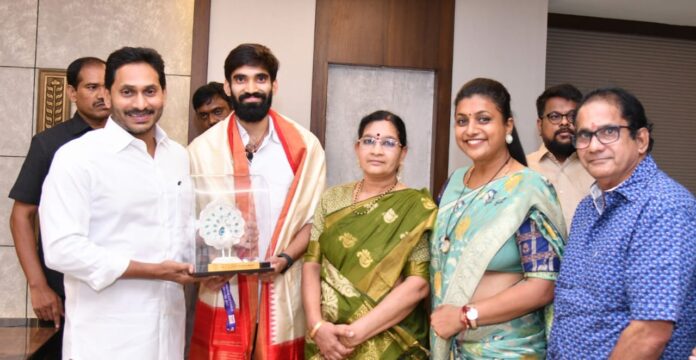 Jagan govt steps into fourth year
Amaravati, June 30: Stepping into the successful fourth year of governance, the month has many significant happenings from striking a deal with Byjus and laying foundations for the establishment of mega industries, to Chief Minister’s visit to Delhi.
Moving forward with prioritizing both development and welfare, the State government had made a pact with Byjus a renowned edutech company to impart quality education to government school students studying from classes 4-10 free of cost. Also, as a game-changer in the education sector, the government decided to provide tabs to class 8 students from this year to guide the students, as they will be appearing for the Class X exam in CBSE in 2025.

On the investment front, the State government gave a nod for setting up Adani’s 3700MW pumped storage project, a Green Energy unit at an investment of Rs 15,376 crore, and creating employment for 4,000 people. During the SIPB meeting, the Board approved several companies, including garment manufacturing and shrimp processing units. Also, a giant company Apache, an exclusive supplier of Adidas footwear, has come to Andhra Pradesh with an investment of Rs 800 crore creating direct employment for 10,000 people.

Chief Minister YS Jagan Mohan Reddy had laid foundation for the company at Inagaluru Village of Chittoor district. He also laid a foundation for three companies at EMC Tirupati and inaugurated three other companies which collectively invested about Rs 4000 crore.
On a brighter note, the State government declared probation for village/ward secretariat staff who were appointed in 2019, and passed the required departmental tests. The government has also fixed the new pay scales for the secretariat staff. Bringing more transparency in the governance, a new mobile application ‘ACB 14400’ was launched to curb corruption in the state.

During the month, the Chief Minister held a workshop for the YSRCP leaders on the door-to-door campaign and discussed several strategies for going to public. Also, he unveiled the State annual credit plan for 2022-23 at the 219th State Level Bankers’ Committee (SLBC) meeting.
As far as welfare schemes are concerned, the Chief Minister provided YSR Yantra Seva Scheme, credited free crop insurance, and Jagananna Amma Vodi.

ATC Tires Director Toshio Fujiwara along with the representatives of his company have met the Chief Minister and invited him to inaugurate their new plant in Visakhapatnam.
Badminton player Kidambi Srikanth, Deaflympian tennis player Sheikh Jafrin, and newly elected MLA for Atmakur Mekapati Vikram Reddy have paid a courtesy visit to the Chief Minister.