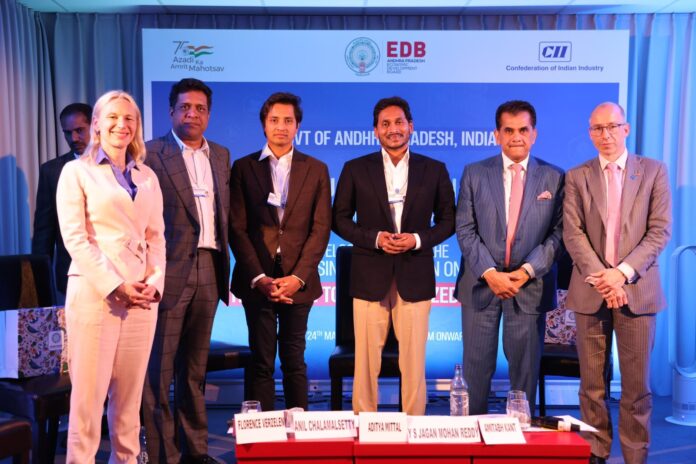 Appreciation to AP CM Jagan from speakers
Davos, May 24: Andhra Pradesh Chief Minister YS Jagan Mohan Reddy has come in for appreciation from the speakers at a panel discussion on the initiatives the State has taken towards decarbonized economy and could be a role model the world.
In his introductory remarks, the Chief Minister said that he has recently laid foundation stone to the world’s largest integrated renewable energy storage project at Kurnool which has a capacity of 5230 MW in a single location which includes pump storage, solar and wind energy.
The State has the potential of 33, 000 MW, the Chief Minister said, and invited the Companies to be part of the decarbonized economy that is the clear future.

Getting into decarbonized mechanism is need of the hour and I extend my invitation to join us in the endeavor.
In compliance with Environmental, Social and Governance (ESG) he State showcases the 5230 MW Kurnool plant which has 1650 pump storage capacity with the support of battery, 350 mw of solar project and 960 mw of wind power in one location. The size and scale speaks volumes about the direction in which we are going, he said.

Elaborating further, he said, you build a dam and the quantum of water used is just 1 tmc to drop water during peak hours to generate power and lift it back to the reservoir using solar and wind power during non peak hours. At the end of it you have 1650 mw power that can be given 24 hrs a day and it is economic, sustainable and feasible. To generate power from solar and wind and to pump the water back, is the simple concept.

What Andhra Pradesh has is, it has got the capacity to build these pump storage capacities up to 33,000 mw and it is open for the globe to come over and participate The conventional industry can convert into green industry. Using this power to create hydrogen, ammonia, desalinate water, electrolysis in the days to come and years to come to becomes a reality. Andhra Pradesh is there to welcome you in this grand endeavor.

The panelists Amitabh Kant, CEO of Niti Aayog, Aditya Mittal CEO of Arcelormittal, Anil Kumar Chalamsetty, MD and CEO Greenko and Florence Verzelen, Executive Vice President Dassault Systems were full of appreciation towards the initiatives of Andhra Pradesh Government and agreed in unison on the need for green hydrogen and decarbonized economy which is the future and YS Jagan Mohan Reddy’s vision is ahead of time.