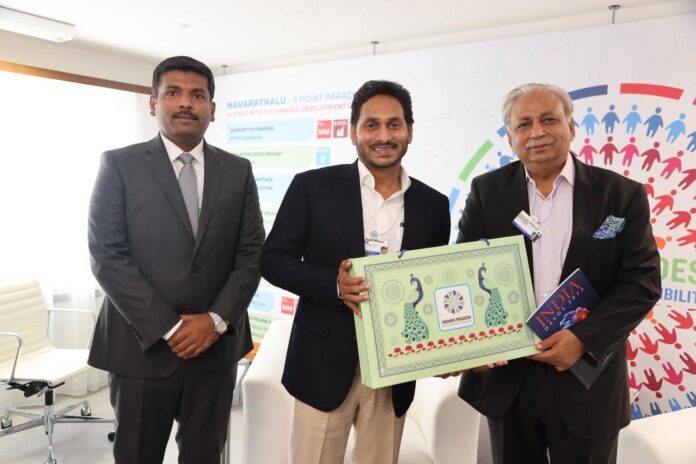 Investments in shipping, bio ethanol
Ap CM Ys Jagan meets trade delegates
Davos, May 23: Heads of various Corporates have met Andhra Pradesh Chief Minister YS Jagan Mohan Reddy and had explored trade opportunities in the State with shipping and logistics and setting of bio ethanol plant being agreed upon on the second day of the World Economic Forum (WEF) Summit being held here on Monday.
Captains of Tech Mahindra, Dassault Systems, Mitsui OSK Lines and Hero Group had met the Chief Minister at the AP Pavilion and held discussions with the Chief Minister.

Tech Mahindra CEO and MD, CP Gurnani said his Company will be working with Andhra Pradesh government in the field of Skill Development.
The Chief Minister wants to develop Visakhapatnam as Technology hub with focus on Artificial Intelligence (AI) and sought investments in that sector.

In three months, we will be working with Andhra University in drafting syllabus for high-end technology for skill development, he said. The Chief Minister said that besides a Skill University, 30 Skill Colleges and 175 Skill hubs would be coming up in the State. Tech Mahindra subsidiary Assago Industries Pvt Ltd. would set up a Rs 250 crore ethanol manufacturing unit in the state.

We are interested in investing in education sector and are looking forward to partnering with the State of Andhra Pradesh, she said.
Later, a Swiss Parliament Member of Indian origin Niklaus-Samuel Gugger along with his team met the Chief Minister and discussed trade opportunities in Andhra Pradesh.

Others who met the Chief Minister include, Mitsui OSK Lines President Takeshi Hashimoto and Hero group CMD Pawan Manjul.
Hashimoto has said that they have discussed on opportunities in the areas of shipping and logistics. The Chief Minister said to focus on the container hub and logistics. The four new ports would increase the shipment cargo to 507 metric tons annually.
Andhra Pradesh has a great potential and we plan to expand our Indian operations as the State has a long coast line. The four new sea ports coming up in the State makes the atmosphere more conducive.

The Hero group CMD discussed about the expansion plans in the State and providing water to its Tirupati facility. There was also discussion on the growing need for electric vehicles.