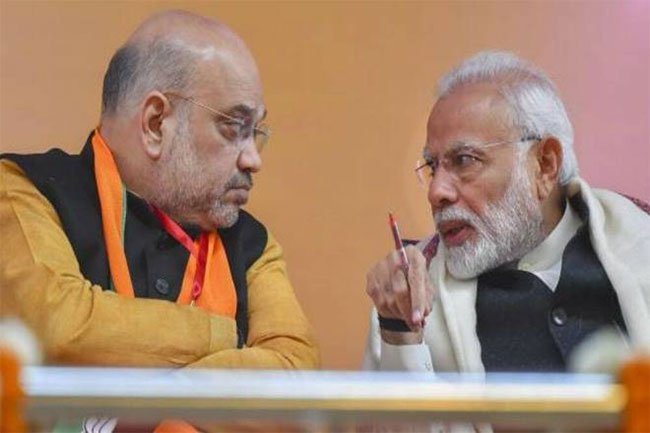 BJP slowly pursuing it’s core agenda
Modi government diverted attention
(Anita Saluja, New Delhi)
Whether it’s the demolition drive, unnecessarily prohibiting Azaans in Masjids, or harassing Muslims by hook or by crook, an estimated 15.4 per cent of the population under Modi Raj has no future in India: slowly & gradually, Indian citizens are realizing that the BJP regime is pursuing its Core Agenda, for the formation of Hindu Rashtra.
Instead of concentrating on serious issues affecting the development of the country, the Modi regime has diverted all its attention to sundry issues that only lead to inciting communal hatred and violence. But, perhaps, this is the sole agenda of the Modi-Shah duo. Only by training its guns on trivial issues like demolition drive and noise pollution to target loudspeakers in mosques, can they create an atmosphere, where big issues ultimately will have to be roped in to address the smaller issues.
While restrictions on Azaan and usage of Bulldozers in the localities inhabited by the Minorities have become the order of the day in the municipal bodies and State Governments run by the BJP, in the larger perspective, it tantamounts to nothing else but undue harassment of Muslims. They are being told in clear-cut terms that in India, they have no place to live. The sooner they understand, the better.
By overpowering the Minorities, the BJP, at the Centre, wants to achieve the agenda of subduing their voice, which will restrict them in putting spokes in the path of the Modi government in creating a Hindu Rashtra. Slowly and gradually, says RSS Chief Mohan Bhagwat, their dream would be fulfilled! But, if it is so easy, will the BJP have a cakewalk in realising its Core Agenda?
If we see the Hindutva trajectory of the Modi-Shah duo, they, with the electoral numbers on their side in Parliament, have been succeeding in reaching their goals. First, it was the Abrogation of Article 370, which Home Minister Amit Shah brought in Parliament, surprising his colleagues and the entire Opposition. By passing the J&K Reorganisation Act, he bifurcated Jammu & Kashmir and Ladakh into two Union Territories, depriving J&K of its Statehood. Though, he has stated that after the delimitation exercise, he would restore Statehood to J&K, but it remains a distant possibility. Unless the Minorities in the State are brought in line, the BJP cannot afford to give them back their freedom. They will have to be controlled from Delhi.

The construction of the Grand Ram Temple at Ram Janmasthan in Ayodhya, the declaration adopted at the BJP convention in Palampur, way back in 1989, has also been achieved by the powerful duo at the Centre. It was a Herculean task, but the BJP did not shy away from demolishing the Babri Masjid on December 6, 1992. Now, it is moving, step by step, in realising its dream of constructing a Grand Ram Temple on the disputed site in Ayodhya. What Advani and Vajpayee could not do in their entire life, Modi and Shah have achieved in their so-called Ram Rajya, where only Hindus have their voice.
To fulfil their agenda, what they require is popular mandate, the reason why they are desperate in forming Governments in one State, after the other. With a series of State elections due this year and the next, the BJP has again turned belligerent on its Hindutva Agenda.
The language issue was raked up by none other than Home Minister Amit Shah, who emphasised that Hindi should be the language of communication in the country, the statement that infuriated the Southern cine stars this time, resulting in a vitriolic spat between Ajay Devgun and Kannada actor Sudeep. Ironically, the peaceful atmosphere in the country is not vitiated by the citizens, but by the present rulers, who deliberately rake up trivial issues to assess the response of their strategic outbursts.
By bringing in non-issues into the public discourse, it becomes easier for the BJP Netas to assess the timeframe by which they can reach their political goal. Take the issue of Uniform Civil Code. Minister of State for Home Ajay Mishra, or any State Chief Minister, raises the issue out of the blue, to evaluate the fallout of his comment. If the issue is resisted severely, they will keep quiet for a while and again some maverick will be heard talking about it.
In the case of Citizenship (Amendment) Act (CAA), the entire Muslim community stood up against the law, forcing the Modi Government to go slow on the implementation of the Act. But, the Act has been shelved only till such time when the NDA Government attains more power to bring it back.
The Citizenship Amendment Act (CAA), 2019, is a classic example of virtually establishing India as Hindu Rashtra, the goal of RSS. Just as a Jew in any part of the world can go back to Israel as his or her natural homeland, a Hindu can similarly move back to India, as a natural homeland. According to the CAA, any Hindu, who arrived in India before December 31, 2014, can fast-track the process to acquire Indian citizenship. But, this will not be the case with the Muslims.

The Demolition drive at Shaheen Bagh in Delhi, the epicentre of protests against the CAA, was thwarted by the Minorities, but till when? Ultimately, the Government at the Centre will have its say, sooner than later.
The Bulldozers and the restrictions on Azaan are all smaller steps to threaten and intimidate the Minorities to fall in line, or face the consequences. Who will dare to raise their voice against the Government, once they become familiar with the repercussions that will follow?
The smaller (ban on Azaan and demolition drive) and bigger steps (CAA, Uniform Civil Code, Hindi as Link Language) will, therefore, go side by side till the creation of Hindu Rashtra. It’s an alarm bell for the Liberal Hindus and the secular Opposition, beckoning them to join hands to halt the BJP in its tracks. Already, except for the States of West Bengal, Maharashtra, Punjab, Chhattisgarh, Rajasthan, Jharkhand, Delhi and some of the North-Eastern States, the BJP is in Government in all the other states of the country.
To think that the BJP will retrace its steps is next to impossible, as it is religiously following its ideological path that will earn them rich political dividends. For this, they can go to any extreme, even amend the Constitution, if they can muster a two-thirds majority in Parliament. It is only the saner voices within the political spectrum, who want to retain the secular identity of India, which can rein-in the BJP. Unless, the saner voices join hands, India will cease to be a Secular Country, where Taj Mahal, Seven Wonders of the world, will be renamed as Shiva temple, Qutub Minar as Vishnu Stambh; and all the other streets will be christened on the names of Hindu leaders. (Author is a prominent political analyst based at New Delhi)