Malnutrition a challenge to India 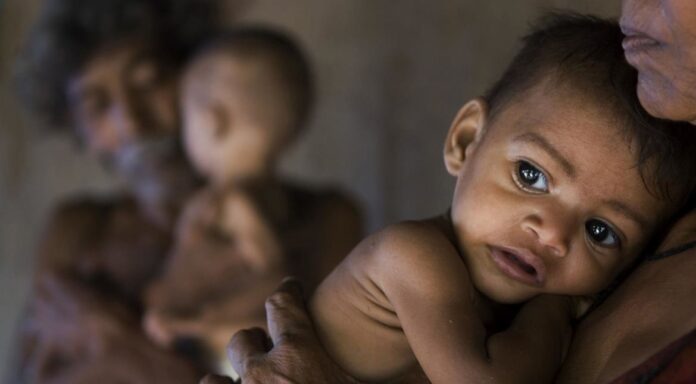 25% of malnourished in our country
Corona made the situation much critical
(Dr. N. Khaleel, Hyderabad)
Any country can be economically prosperous if its citizens grow up healthy. Malnutrition poses a major challenge to Childhood Malnutrition in India. The United Nations has set the Sustainable Development Goals for 2016, stating that poverty is the cause of all kinds of problems in the world and that it should be eradicated by 2030. The Corona virus boomed in the process of taking steps in that direction. As a result, the situation of the poor and the common people has become like a fiery furnace. Many have lost their livelihoods, lost their livelihoods and plunged into abject poverty. Stay away from malnutrition (malnutrition). This effect on children is highest.
Reports are alarming that a quarter of the world’s malnourished children are in India. Millions of crores of rupees have been spent since independence under the slogan ‘Health is Wealth’. Countless schemes have been introduced for public health. Moreover, even if the rulers take care of the issue of providing nutritious food to the poor and spend crores of rupees across the country, the expected results have not been achieved. Poverty is on the rise not only in the country but also around the world. The United Nations reports that it has failed to provide nutritious food, regardless of the causes or factors.
Over the past couple of years the poor have grown even more due to corona crisis. The World Bank estimates that more than fifteen billion people worldwide are living in additional poverty. An estimated ten to twelve million people are additionally trapped in starvation tusks. The fact is that the availability of nutritious food for all is a boon and there are billions of people who do not get food at least half of their meals. Mainly 40% of children under the age of five are born underweight and 7% of them die within five years of birth. The vast majority of them are dying of various diseases due to malnutrition. The Constitution provides for the right to life for everyone born. But it is an inescapable fact that if a toddler dies due to malnutrition, it is the ruling party that is responsible.
Not to mention that the mother is neglecting her responsibility to provide timely nutrition to the baby. Unless new schemes are introduced for this. The ruling elites need to think once and for all about how the existing schemes are being implemented. The situation of the millions of poor living mainly in the slums of the cities will be made miserable in the future. Their children are suffering from the spread of diseases with unhygienic environment with water and air pollution. Numerous surveys and studies conducted by the World Health Organization and UNICEF are clear. In particular, contaminated water is plagued by diseases such as diarrhea. Central and state governments continue to spend billions of dollars annually across the country through schemes such as the Integrated Child Development Services (ICDS) to force-feed children to make them malnourished. Not even a quarter of the funds spent on this will reach them. It is a well-known fact that the vast majority of crooks are eaten by corrupt officials. On the other hand, children from poor families attending public schools often fall ill. This is also due to the negligence of the rulers. One-third of government schools across the country do not have toilets. Most of the existing ones are also ugly. There is a lot of manipulation going on in the nutrition provided for maternal care under the Child Development Plan. This is not to say that Anganwadi Centers are not serving but are not delivering the expected results. The CAG has also objected to this several times in the past. It is unfortunate that those reports have been ignored and no attempt has been made to rectify the shortcomings and implement them more effectively.
In the shadow of poverty …
The Food and Agriculture Organization (FAO) 2020 report states that 19 crore people in India are suffering from malnutrition. One-third of children nationwide (malnutrition in children) are malnourished, according to a previous National Family Health Survey. Thirty-eight percent of children die of malnutrition. Thirty-four percent of children under the age of five do not grow taller than they should be. 17.3 percent were underweight for height. Seven lakh people die every year in the country due to malnutrition. Millions of children die every year from starvation. According to the Union Ministry of Women and Child Welfare, 9,27,606 children between the ages of six months and six years are suffering from severe malnutrition in the country by November 2020. In Andhra Pradesh, the number is 11,210; 9,045 in Telangana. For the fourth time, the National Family Health Survey revealed that 43 per cent of girls in the country aged 11-14 are suffering from anemia. Nationwide, 36 percent of girls under the age of five are malnourished. 51.4% of women aged 15-49 years (malnutrition in women in india) suffer from anemia. Babies are born with low birth weight due to malnutrition among mothers. Poverty in the country was initially projected to fall by 7.9 per cent last year. The situation was reversed due to the corona.

A study by Azim Premji University has revealed that nearly 23 crore people in India have slipped into poverty since the start of the second phase of the epidemic. Revealed that the income of the working class has fallen by an average of 17 per cent over the past. Millions of people are malnourished due to rising employment and poverty. According to official figures, about 11.41 crore people are benefiting from about 14 lakh Anganwadi Centers in the country. Through them, children, adolescent girls, pregnant women, nursing mothers should be provided with milk, eggs and other nutritious food.
Toddler growth is also stunted if proper nutrients are not provided. Doctors keep saying that breastfeeding is best for babies after birth. Nutrition is provided by the mother. But the medical department has not taken much initiative in creating awareness among the people on this issue. Breastfeeding Week is celebrated in the first week of August every year to highlight the importance of breastfeeding. Breastfeeding is very important for the baby to grow up healthy. Breastfeeding is a natural gift and a wonderful medicine. The mother needs to produce milk by the time she gives birth. The mother should be provided with sufficient food to eat that’s where the error lies. The whole world recognizes that breastfeeding is the right food for the baby. Yet we are lagging behind in creating awareness among the people. The management of Anganwadis is also limited. The monitoring error is obvious. Some centers do not have their own buildings. Overall, the death toll is rising due to the failure to provide nutritious food to infants and postpartum women. More than forty out of every thousand pregnant women die in the two Telugu states. This is in line with the implementation of the Food Safety Standards Act (2005) for food security in India. The Food Safety and Standards Authority of India was established under this Act. In the case of food security, similar laws and institutions are set up and other measures are taken but no care is taken when they come into force. As a result, most projects are limited to paper. (Author is a prominent pharmacist)