In the last 3 years no single mandal declared drought 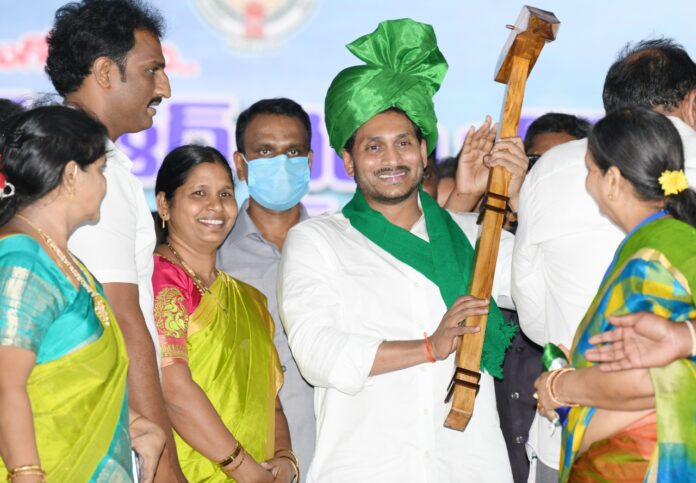 Addressing the gathering here on Monday, the Chief Minister said that the government is committed towards famers’ welfare and thus providing assistance through Rythu Bharosa even before Khariff starts. Under the first installment Rs 7500 is being provided where the State government will be crediting Rs 5500 on Monday and the remaining Rs 2000 will be disbursed by Centre under PM Kisaan by the end of May. Similarly in October at the time of harvest Rs 4000 will be credited and in January during Sankranti festival another Rs 2000 will be credited into the farmers accounts.

The Chief Minister said that so far through Rythu Bharosa scheme alone Rs 23,875 crore had been deposited directly in farmers’ accounts and Rs 1,10,093 crore was spent for farmers welfare through various schemes.

Unlike the previous government which only spent Rs 782 crore towards zero interest crop loans, he said that the State government had paid Rs 1282 crore for zero-interest loans initiative. Recalling the farmer welfare schemes, he said that for the first time in the history of the country that compensation for crop damage in any season was disbursed in the same season, standing by the farmers in tough times besides paying the insurance premium on behalf of the farmers.

Ground water increased in record level
He said there was no need to declare a single mandal in the State as a drought affected in the last three years, as every reservoir was full and the groundwater levels increased to a record level, where the production of food grains increased by 16 lakh tonnes.

Also, the Chief Minister had announced to continue providing Rs 1.50 subsidy on power usage to all the small and marginal farmers cultivating in less than five acres and extended the subsidy to aqua farmers upto 10 acres in aqua zone. He said that the government kept every promise made during elections and stated that he never thinks of politics before doing good for the people.

‘Since the government is implementing every scheme in a transparent manner, the opposition ally Pawan Kalyan who took up rythu paramarsha yatra couldn’t find a single farmer who was not left out without providing compensation,’ said the Chief Minister and opined that to help farmers, one should have good awareness on agriculture and farmers plight.

Pointing out Pawan Kalyan’s rythu yatra, he questioned why Pawan didn’t question Chandrababu Naidu in TDP’s rule, when the latter had failed to waive off crop loans, and implement welfare schemes for the farmers. He said that neither the opposition TDP nor his allies had any moral right to speak for farmers’ welfare.