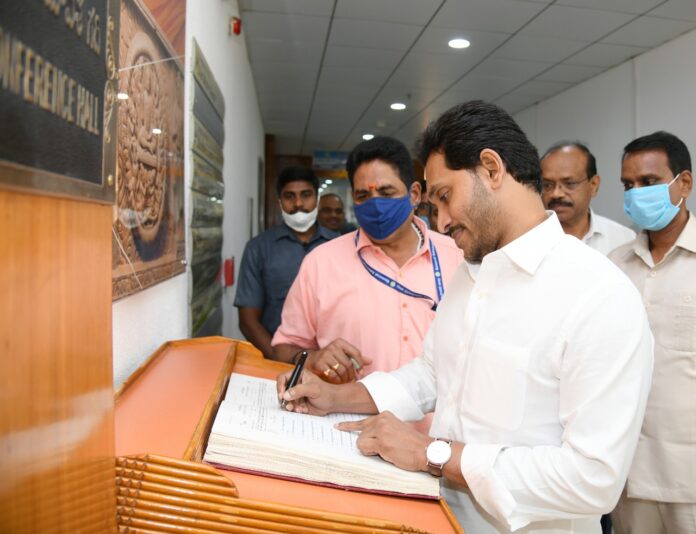 New Export Promotion policy approved
Matsyakara Bharosa on May 13th
Cabinet takes key decisions
Amaravati, May 12: Andhra Pradesh State Cabinet, chaired by Chief Minister YS Jagan Mohan Reddy, on Thursday, has taken key decisions which include early start of agriculture season, approval of AP Export Promotion Policy 2022-27 and AP Logistics Policy 2022-27.
Water release to Godavari delta on June 1st
Briefing media after the cabinet meeting, Irrigation Minister Ambati Rambabu said the state government has decided to start the kharif season early by releasing water to Godavari delta from June 1, Krishna delta and Guntur Channel from June 10 and added that water will be released to farmers of ayacut of Somasila, Gandikota, Chitravati, Bramhamsagar projects from July 10 and Nagarjuna Sagar project from July 15. He said water will be released to ayacut farmers of Rayalasmeea region under Gorakallu reservoir, Owk, Gandi and SRBC from June 30 and added that these dates are announced in advance so that farmers will be prepared.

The Minister said the cabinet has approved upgradation of primary health center to community health center in Pamarru of Krishna district and also for setting up Government Degree College for women in Pulivendula along with sanction of 26 teaching and 10 non teaching posts. He said the cabinet also approved to raise a loan of Rs 1,600 crore from the financial institutions for development of Agriculture and Agricultural marketing activities including improving connectivity from farmgate to markets, primary processing facilities, rythu bazars, farmgate infrastructure and facilities in market yards.

He said the cabinet has sanctioned eight deputy managers and 22 assistant managers posts in State Cooperative Marketing Federation and also for setting up Agriculture University at MRR Charitable trust in the name of Late Mekapati Goutham Reddy at Udayagiri in SPSR Nellore district. The Minister listed out the allotment of land to various entities for development works.

The Minister said the Cabinet has approved for Matyakara Bharoasa on May 13, YSR Rytu Bharosa on May 16, launch of Animal Ambulance on May 19, distribution of 3000 tractors and 402 combined harvesters in 4,014 Community hiring centers on June 6, YSR Crop Insurance on June 14 and Amma Vodi on June 21.